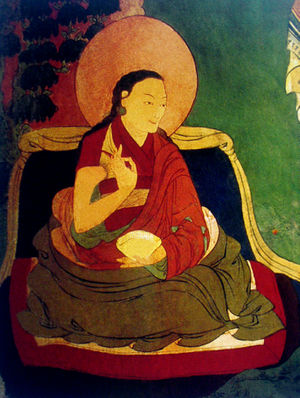 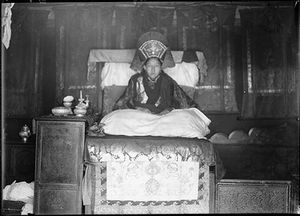 The present 12th incarnation of Samding Dorje Phagmo as a young woman, before 1959

Princess and daughter of the king of the Gungthang court, a principality in Southern Tibet. Born in the tiger year of 1422, she was recognized by the court astrologer as a "divine incarnation" which was however not specified any further. According to a prophetic dream of her mother, she was initially named Könchog Gyalmo (dkon mchog rgyal mo). At age six she conceived of the wish to renounce the world, but was not permitted to go ahead with it, as she was to be married to one of the princes of the neighboring principalities. However, her childhood seems to have been relatively trouble-free and happy. Eventually, and against her wishes, she was married to the prince of Southern Latö, in order to form a political alliance. Arriving in her new home, the Southern Latö capital of Shelkar, she immediately antagonized and subdued the Bonpo priests of the royal household by practicing the rituals and self-empowerments of Vajravarahi. At age nineteen she became pregnant and gave birth to a girl. The child was initially fine but died while Chökyi Drönma was away for a time, helping to mediate in a dispute that had broken out at her father's court in Gungthang. This, and presumably other events, strengthened her resolution to take religious vows. Everyone tried to talk her out of it, but she remained steadfast. At this time she had become a benefactress of the Porong Palmo Chöding monastery, had read some of the main works of Bodong Panchen Chogle Namgyal, his famous "de nyid 'dus pa" collections and had met the lama when he visited Shelkar Dzong. He left a lasting impression on her and she forthwith wanted nothing else but become a good student of his. Time and again she requested both her father's and her husbands families permission to take monastic ordination, but to no avail. Eventually she resorted to extreme means, tearing her hair and hurting herself. Standing before her shocked family, bloody, disheveled and in a very agitated state, she finally obtained the desired permission to leave worldly life behind. She set off for Porong Palmo Chöding very soon afterwards and was warmly welcomed there by Chogle Namgyal. Shortly after her arrival there she received monastic ordination from him. It was during this event that Chogle Namgyal recognized her as an emanation of the deity Vajravarahi. This was later confirmed by Thangtong Gyalpo. She spent most of the remainder of Chogle Namgyal's life with him and became one of his foremost disciples. Having exchanged her royal life in the courts of Gungthang and Shelkar with that of a religious renunciant, she became a begging nun. On one of her visits to her ancestral home, she heard the bad news that her lama lay gravely ill and was about to depart for the pure realms. In a spectacular ride across the icy passes that separate her homeland from the high pastures of Porong (more a mad dash than anything, during which her father had to be left behind because he couldn't keep up with their speed), she managed to arrive at his side before he passed away and spent his remaining days at his side, until the final days of the third month of the sheep year of 1451. After his passing she took care of all the funeral arrangements, and everything was done in great detail. Afterwards she spent many months wandering the surrounding mountains, practicing meditation in the many caves there. She is also responsible for collecting all the works of her lama, reproducing them and making them thus available for posterity. It is probably due to her efforts alone that we are fortunate enough today to still have the collected works of Bodong Panchen Chogle Namgyal. Having already heard of the great Mahasiddha Thangtong Gyalpo, she wrote him letters, asking for advice on many matters, and eventually traveled to meet him. She met him at his seat at Chung Riwoche, and with her support he was later able to build his famous stupa there. Chökyi Drönma stayed with him for just under two years. Upon her repeated requests for guidance Thangtong Gyalpo predicted that she would have a long life, but few students if she stayed in the region, or benefit many students but have a short life if she went east. Consequently she took off for South-eastern Tibet and particularly to the sacred Pure Crystal Mountain of Tsari (tsa ri dag pa shel ri) where she attracted a large number of followers. On one of her brief journeys to Lhasa, she met with the famous Indian pandita Vanaratna and also heard of the growing fame of Tsongkhapa Lobsang Dragpa, who was later credited with reforming the remnants of the Kadampa school and establishing the new Gelugpa order. Unfortunately the biography of Chökyi Drönma is incomplete and the missing folios have so far not been located. The remainder of her life thus needs to be reconstructed from other sources. The biography of Thangtong Gyalpo informs us that on her final return journey to Tsari she fell ill and passed away at Menmogang in her thirty fourth year, in late 1455 or early 1456. Her skull was kept there and venerated as a sacred relic. It was said to have special miraculous qualities.

Her incarnation, Kunga Sangmo (kun dga' bzang mo, 1459-1502), was predicted by Thangtong Gyalpo upon the repeated inquiries by Chökyi Drönma's main student, the nun Deleg Chödren, as we can read in the Mahasiddha's biography by Lochen Gyurme Dechen. She eventually made her seat at Samding monastery, originally the seat of the great Shangpa Kagyu master Khetsün Shönu Drub (mkhas btsun gzhon nu grub, d.1319). Thus her incarnation lineage became known as the Samding Dorje Phagmo (bsams sdings rdo rje phag mo). Many of these incarnations were famous for their clairvoyance and miraculous abilities and left hand and footprints in rocks, or displayed other miracles. Some of them were scholars, learned and accomplished far beyond their own tradition, and at least one (the 9th incarnation Chöying Dechen Tshomo, chos dbyings bde chen mtsho mo, d. 1843) has revealed termas. The present incarnation, Dechen Chökyi Drönme (bde chen chos kyi sgron me, b. 1938), who lives in Tibet, is the 12th. [TSD]