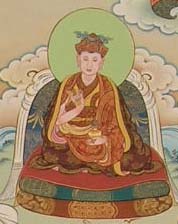 Ngagi Wangpo, Dordrak Rigdzen Chenpo III (1580-1639), the son of Jangdak Tashi Tobgyal he was the third incarnation of Rigdzin Godem and immediate rebirth of Lekden Je. Born in 1580, as a young child he could clearly recall his life as Legden Dorje. He received every teaching from his father and later the Drikung master Rinchen Puntsok ordained and enthroned him. After a trip to Kham in which he not only taught but brought and end to war between various small kingdoms, he collected several smaller communities of monks and yogis at Padma Evam Chogar Dorje Drak, becoming the first abbot. In 1610, he began to build a new monastery. It is said that during this time around two thousand disciples gathered at Dorje Drak. At the birth of the great Fifth Dalai Lama, Ngagi Wangpo blessed him.

His main disciple was the rebirth of the Yolmo Shakya Zanpo, Tenzin Norbu. He left instructions with Tenzin Norbu to complete the monastery. In 1639, with no visible signs of illness, Ngagi Wangpo called the community together. He gave them instructions for immediate and future guidance, dedicated the merits of his life for the enlightenment of all beings and then retired to his quarters where he passed from this world. According to his instructions, Tenzin Norbu took up the responsibility of Dorje Drak as the his regent.