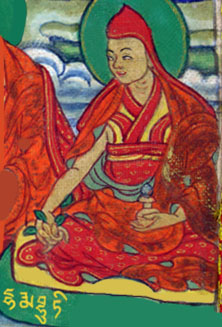 The first incarnation was that of Jetsun Ngawang Choejor Rinpoche, the Lord of Siddhas. He was born in the Nangchen district of Eastern Tibet in the Earth Rabbit year of the Fourteenth Rabjung (1842), as the son of Peh Urgyen Wangchuk.

From an early age he possessed strong knowledge of the dharma and soon entered the King of Nangchen’s monastery, Tsechu Gonpa. Where he perfected the entire practice of Naropa’s Six Yogas, and other profound teachings he received from the master Dorjechang Drubwang Tsoknyi. Following that, he received instruction from HH the 14th Gyalwang Karmapa, Thegchog Dorje, and in accordance with the Karmapa’s advice, he traveled to study under Jamyang Khyentse Wangpo and Jamgon Kongtrul Lodro Thaye. Having practiced the two forms of listening and reflecting to the best of his ability, the 1st Ngawang Choejor attained mastery over explanation, debate and composition as well as gaining realization on the yogic stages of development and completion.

One day after having an auspicious dream, Jamgon Natsok Rangdrol was visited by the young Ngawang Choejor, whom he came to believe was the emanation of Rigdzin Jetsun Nyingpo. Later it was confirmed through the pure vision of Jamyang Khyentse Wangpo that indeed Ngawang Choejor was this incarnation and he commanded Natsok Rangdrol to conifer the young Rigdzin Ngawang Choejor with, among other teachings, the empowerments for the entire cycle of Jatson Nyingpo’s treasure teachings.

These two masters later authorized Ngawang Choejor as a Holder of the Lineage and requested him to begin teaching and guide beings. It was the great siddha, Choewang Rinpoche that said ‘When I come to see you, I do not see you as an ordinary man, I only see you as Chenrezig, so it must be that you are an emanation of the Lord of Compassion!’ Additionally, many great noble beings recognized him as the incarnation of Lord Milarepa, the siddha Lingjerepa and other great masters of the past.

In the remote Shelri Lhunpo hermitage, the Lord of Siddhas, had innumerable visions of enlightened beings such as White Tara, Hayagriva, Manjushri and many other sublime deities. He left countless wondrous signs of his accomplishments, such as leaving his footprint in stone and extracting water from rocks with his bare hands. His benevolent achievements for the sake of all mother beings pervaded throughout all the ten directions and he was a profound master who became the teacher to many scholars and saints of his time, like the second Drupwang Tsoknyi, the great treasure seeker Kundhu Lingpa, the Mahasiddha Choewang Rinpoche, Pawo Tsering and so on . He constructed many new monasteries, and retreat centers, among which Pal Thraril Ngedon Tengye Ling became his main seat. In the water dog year of 1922, at the age of eighty, the Lord of Siddhas, Jetsun Ngawang Choejor’s mind dissolved into its intrinsic nature with an array of amazing signs.