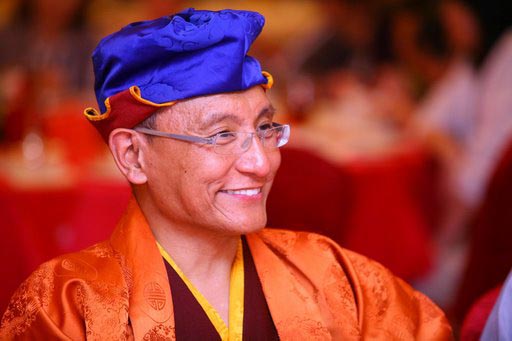 His Holiness Jigme Pema Wangchen the 12th Gyalwang Drukpa Rinpoche, the supreme head of the Drukpa Kagyu lineage of Tibetan Buddhism, is the incarnation of the Bodhisattva of Compassion Avalokiteshvara, and the Great Abbot Shantarakshita; the Kagyu masters Naropa and Gampopa.

His Holiness was born 1963 in Guru Rinpoche’s sacred place known as Tso Pema (Lotus Lake) in Rewalsar, Himachal Pradesh India. His father is the Dzogchen Master Bairochana Rinpoche commonly known as Zhichen Bairo Rinpoche, a great Nyingma Master of the Kathok school, and his mother is Mayum Kelsang Yudron. While His Holiness was still in his mother’s womb, it’s said he began recited the mantra of Buddha Amitabha. As a young child, Nenang Pawo Rinpoche gave his blessings to the Gyalwang Drukpa and indicated that “he is special indeed”. The Gyalwang Drukpa would often proclaim that he was a high Lama to his parents. Through the advice of the H.H. the 14th Dalai Lama, the H.H. the 16th Gyalwa Karmapa, Kyabje Dudjom Rinpoche and the Kyabje Sakya Trizin, the 12th Gyalwang Drukpa was found and recognized at the age of three.

The Gyalwang Drukpa was first ceremoniously welcomed at Khamtrul Rinpoche’s monastery. Then Rinpoche was enthroned in the presence of the Dalai Lama in Dharamshala. He was officially enthroned at his own monastery in Darjeeling in 1967 at the age of four. He was able to correctly identify the possessions of his predecessor and names of his attendants and disciples by heart, as if he already knew them. His name, The name he came to be known by, Jigme Pema Wangchen was given to him by Kyabje Dudjom Jigdrel Yeshe Dorje with all the traditional congratulations and divine blessings.

From a young age, the Gyalwang Drukpa was always known for his love and compassion, and also his inability to consume the flesh of other beings. Shortly after his enthronement he said to he parents two days before the late Drukpa Thuksey Rinpoche came to see us that "a white bearded man will come soon to pick me up". His Holiness was first educated by Drukpa Thuksey Rinpoche, the Regent of the Drukpa Lineage, and also by his father Zhichen Bairo Rinpoche. He likewise received extensive transmissions, religious instructions, teachings, vows and training on various arts and philosophies under masters such as His Holiness the 14th Dalai Lama, Dzigar Khenpo Noryang, Dudjom Rinpoche Jigdrel Yeshe Dorje, Pawo Rinpoche, Trulshik Rinpoche Ngawang Chökyi Lodrö, Zhichen Ontrul Rinpoche, 4th Dodrupchen Rinpoche Thupten Thrinle Palbar, and Lobpon Gangri Kunsang Dorje.

After many years of study and practice, Rinpoche has made the Druk Thupten Sangak Choling Monastery (Dali Gompa), built in 1971 by the Regent Drukpa Thuksey Rinpoche in Darjeeling, as the reestablished home for the Drukpa Kagyu Lineage in exile. While still overseeing many monasteries of the Drukpa Kagyu tradition in Ladakh, Tibet, Bhutan, Nepal, and Sikkim, as well as the Far East, and now he has centers in the West. Where Rinpoche teaches his many western students, in perfectly impeccable English, and has been noted for his directness, frankness and freedom from convention in teaching the holy Buddhasdharma.