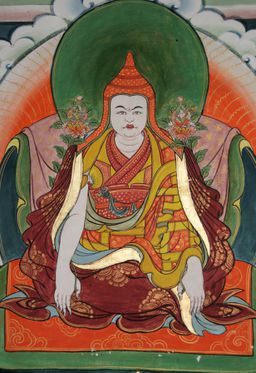 Longchen Rabjam Drime Ozer' (1308-1364), was the reincarnation of Princess Pemasal, the daughter of King Trisong Deutsen and direct student of Guru Rinpoche. His birth in the Tra Valley of Southern Tibet was accompanied by miraculous events and auspicious omens. He began his Dharma training at the age of seven, when he received empowerments and teachings from his father, a tantric yogi. At twelve, he took novice monastic vows at Samye monastery.

Longchenpa studied and practiced teachings from a variety of lineages and masters. He received and mastered so many teachings, in fact, that he became known as Samye Lungmangwa, the One of Samye with Many Transmissions. Though he is associated primarily with the Nyingma lineage, he also studied many teachings of the Sarma, or New Schools, including the Kalachakratantra, Chöd, and the Path and Result teachings of the Sakya lineage. He shared a particularly close relationship with the third Karmapa, Rangjung Dorje, with whom he studied under the Dzogchen master Rigdzin Kumaraja.

Rigdzin Kumaraja was Longchenpa's most important master. He lived with him for two years, practicing the Dzogchen teachings of the Heart Essence of Vimalamitra under extremely harsh conditions. Rigdzin Kumaraja eventually empowered Longchenpa as the lineage holder for these teachings. Longchenpa also reawakened a connection with the Heart Essence of the Dakinis, the Dzogchen lineage of Guru Rinpoche, and practiced these teachings for years in isolated mountain retreats.

Longchen Rabjam's influence upon the Nyingma lineage is unparalleled. He united and compiled teachings concerning the two main Dzogchen Heart Essence lineages in a work entitled Four Volumes of the Heart Essence, adding three commentaries of his own to the teachings of Guru Rinpoche and Vimalamitra. He also wrote the famed Seven Treasuries, texts that present various aspects of the view, meditation, and conduct of the Nyingma school's nine vehicles.

Longchenpa passed away at the age of fifty-six. He left over two hundred and fifty treatises behind, many of which are still regarded as the most comprehensive and authoritative works yet written concerning the view and practice of the Great Perfection. His most important students include the 3rd Karmapa, Rangjung Dorjé, with whom he exchanged teachings, Özer Kocha, and his son, Tülku Trakpa Özer.

The date for Klong-chen rab-‘byams-pa’s parinirvāṇa (his relinquishing of the appearance of his physically manifest form to others–or, in common parlance, his "death" or "demise") is often incorrectly given as having been during the year 1363. However, Klong-chen rab-'byams-pa did not "die" in the year 1363; his parinirvāṇa was in the year 1364. The discrepancy is due to carelessness in assessing the year, which is, with little trouble, validly interpretable; having, himself, been (as implied by some other entries here) a remarkable scholar, his entire life has been well chronicled. Klong-chen rab-'byams-pa was born at Gra-phu stod-gron in g.Yo-ru in Eastern dBus in Central Tibet on the eighth day of the second lunar month of the Earth-Male-Ape year (i.e., Friday, 1st of March, 1308; which was at the begining of that Tibetan calendrical year) The date of Klong-chen rab-'byams-pa's parinirvāṇa was on the eighteenth day of the twelfth lunar month of the Water-Female-Hare year (i.e., Wednesday, the 24th of January, 1364; which was at the end of that Tibetan calendrical year) at O-rgyan-rdzong in Gangs-ri thod-kar, Tibet. 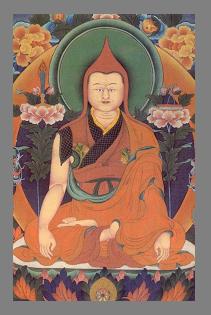 Longchenpa (klong chen pa) (1308-1364)
འཛམ་གླིང་མཛེས་པའི་རྒྱན་དྲུག་མཆོག་གཉིས་དང༌། །
ཐུགས་རྗེ་ལུང་རྟོགས་མཉམ་པའི་མཐུ་མངའ་ཡང༌། །
ནགས་ཁྲོད་དམ་པར་སྦས་པའི་བརྟུལ་ཞུགས་ཀྱིས། །
འཁོར་འདས་ཆོས་སྐུར་རྫོགས་པའི་ཀློང་ཆེན་པ། །
དྲི་མེད་འོད་ཟེར་ཞབས་ལ་གསོལ་བ་འདེབས།། །།
The adornments of our world, the Six Ornaments and the Two Supreme Ones,
Though endowed with equal compassion, learning, and realization,
By practicing secretly in sacred forests,
Consummated samsara and nirvana in the Dharmakaya the 'Great Infinitude,'
Drimé Özer (Longchenpa), at your lotus feet I pray!