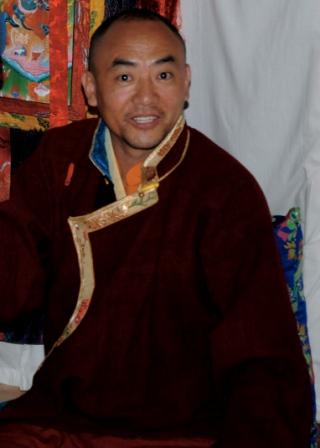 Anyen Rinpoche is a tulku from Amdo, Tibet, and is an esteemed scholar as well as a heart son of his root Lama, Minyak Tsara Khenchen Dharmakirti Rinpoche. He is the fifth in an unbroken lineage of heart sons who received their uncommon lineage of the Longchen Nyingthig and introduction to the Dzogchen teachings directly from the renowned Dzogchen master Patrul Rinpoche. Anyen Rinpoche's training included many years of intensive study and periods of solitary retreat before he obtained the degree of khenpo and became the head scholar of his root Lama's monastic university in Kham, Tibet.

Anyen Rinpoche was raised from birth by the accomplished Dzogchen yogi Lama Chupur. In addition to receiving the entirety of his own root Lama's empowerments, transmissions, and oral instructions, Anyen Rinpoche received the transmissions, empowerments and instructions on the channels, wind energies and bindus from the eminent Ngakpa yogi Dorlo Rinpoche. He also studied Lamrim Chenmo, as well as the Gelugpa style of logic and debate, with Dehor Geshe.

Anyen Rinpoche lives in Denver, Colorado, where he founded the Orgyen Khamdroling sangha and a shedra for Westerners to support those who are interested in practicing the Longchen Nyingthig teachings authentically. His teachings focus on extracting the essence of the Secret Mantryana teachings and the precious human life, so that practitioners can become genuine embodiments of the profound lineage teachings.