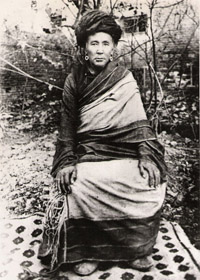 Ladakh Tripon Pema Chogyal (1876-1958), He was one of the heart students of Shakya Shri, who travelled on foot from Ladakh to receive teachings from his master. Later in life he became an accomplished master and taught important lamas of the Drukpa Kargyud lineage. Among his students were HH the 11 th Drukchen, Thuksey Rinpoche, Apho Rinpoche, Stagna Rinpoche, Gegen Khyentse, Sengdrak Rinpoche and many more. Later in life he established many retreat centres on the border of Nepal and had many students, both monastic and lay. He collected and compiled the complete set of the Drukpa Kargyud texts. This is now used in all the Drukpa monasteries. My brother, Sey Rinpoche, is the incarnation of this Great Master.

Tipun is the title of Ngawang Pema Chögyal, who was born in 1877 at Chem-re, Ladakh. At an early age Pema Chögyal was placed in Trakthog Gompa, a Nyingmapa institution, where he completed his early education by the time he was fifteen. This brilliant boy then set forth on a pilgrimage, to travel to various sites throughout Tibet. His journeying eventually brought him to the region of Tsari, where he settled down for a considerable period of time.

It was while he was a serving a Lama in Tsari that Pema Chögyal first began to hear about the venerable Ka'gyu-Nyingma master Shakyasri. Consequently, when the old Lama for whom he was working passed away, he decided that he must go in search of Shakyasri and beg the master to accept him as a disciple. He knew that Shakyasri lived in Kham, towards the east, where the Rimé movement had its centre. So he set forth by foot on a long journey, which was both hazardous and fraught with danger of every kind. Kham at this time was both rugged and filled with marauding bandits. More over, there was a local war going on. Nevertheless, Ngawang Pema Chögyal persisted in his search. Such is the path of yoga. And as it is said, when the disciple is ready then the master will appear. Pema Chögyal eventually found Shakyasri. He also managed to convince Shakyasri to return with him to Tsari.

In Tsari the wisdom-master Shakyasri acquired a great number of disciples. His fame had preceded him. Soon people flocked to him, to receive his blessing or to listen to his public teachings. Those seeking the Path of Liberation also came to him, and in him they found an authentic Master who could teach them the secret way of mystical yoga. There grew up around Shakyasri a number of thriving communities of saints.

So large was the number of disciples, that Shakyasri couldn't instruct all of them effectively. So he appointed teaching assistants. The foremost of these was Ngawang Pema Chögyal, and it was by virtue of his role as a teaching assistant that he acquired the title "Tipun" (instructor of the teachings), a name by which he would ever after be known.

When Shakyasri passed away, Tipun became chief of his master's establishment. This religious establishment was now an extensive organization, and the demands upon Tipun's time and energy were enormous. Indeed, lesser men would at this point have been resigned to a mere administrative role for the rest of their lives. But Tipun quickly came to see that organizational duties, and giving public talks, were only destroying the whole purpose of Shakyasri's original aim, which was to revive and promote "actual practice". In other words, the operation of running the organization was quickly superseding the purpose for which the organization had been founded. So Tipun decided to give the organization up.

Tipun left and went into retreat. He moved to Tsib-ri, in the county of Dingri, and there found an isolated cave in the mountains, which he made his own. He remained there, in that cave hermitage, for the next three years, with neither attendant nor patronage. No one even knew where he had disappeared to. He simply went away, and started to devote himself to genuine meditation practice, living on the most meager supplies.

Some three years later he moved to La-chi, which is another isolated spot. Milarepa had lived and meditated for many years in La-chi. Now, Tipun lived there like a second Milarepa, imbibing the mystical ambrosia of true Yoga.

Gradually word got out as to where Tipun was residing. It was apparent, now, that he was indeed a great saint, and so individual disciples began to appear, begging him to guide them on the spiritual Path. Although pressed by many to teach—that is, to come out and give public teachings and empowerments—Tipun refused to deviate from his set course. If someone wanted to learn from him, they had to live the life of practice with him. He had no interest in becoming a famous Lama, nor was he tempted to give public Dharma-talks to large gatherings. Tipun adamantly remained true to his commitment to the old Ka'gyu-Nyingma tradition of practice.

Tipun resided far out in the wilderness. On the mountain slopes, in the little valleys, all around where he lived, there sprouted up small encampments of genuine yoginis and yogis. Most of these took vows, and became Buddhist monks and nuns. Individuals financed their ability to live in these small hermitages as best they could. It was certainly a hard life.

Over time many high Lamas of Tibet, many renowned great Tulkus, went to Tipun to live the life under his example and guidance. These high Lamas had to live just as the regular disciples did. However, thanks to their presence, Tipun was able to inquire about and gradually gather a vast library of practice texts. Down through the centuries, indeed through the millennia, yogis have recorded their experiences. They have compiled instruction booklets, describing the practical methods of meditation, based on personal experience. The books they wrote were not philosophical dissertations, nor theoretical or theological treatises. The "practice texts" of the yogis and yoginis of the Himalayas were carefully recorded accounts of their experiments and investigations into the nature of the human mind. These text have become a priceless treasure, in which several thousand years of technical yogic knowledge has been gathered. Most of this knowledge deals directly with the nature of the mind, and the path to Enlightenment. Other aspects of knowledge include the methods to awaken the psychic powers inherent in the human being. Some describe "out of the body" experiences to distant world-systems, or particular yogic visions and investigations. Tipun made a concerted effort to have these "practice texts" gathered from all over Tibet and India. This became the central library of the movement.

Tipun's movement was equal for women and men. A group of some twenty women, in training as yoginis, occupied one hermitage. Eight women, taking the vows of nuns, came together and quickly formed another hermitage. These women built their own huts, using local stone and plaster, and organized their food together, so that they could commit themselves to undistracted Yoga practice for the rest of their lives. Another group of thirteen women formed yet another hermitage on a neighboring mountain.

In all, well over a hundred men and women trained in the life of the spirit under Tipun's leadership. And Tipun himself remained true to his own practice.

Tipun lived to the grand old age of 81. When he died, there was said to be many signs that a fully accomplished yogi had passed from this world into eternal Nirvana. When an assembly of mourning disciples gathered to pray at his funeral, a miraculous rain of flowers fell out of the clear sky upon them.