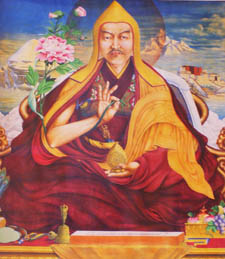 --
Gyalwang Rinpoche, The Great Fifth Dalai Lama (1617-1682), is a towering figure in Tibetan history, renowned for both His temporal and spiritual accomplishments.

The boy who would become known as the Great Fifth Dalai Lama was born in 1617 to a family with strong ties to the Drukpa Kagyu school. While still young, He was recognized by the first Panchen Lama as the reincarnation of the 4th Dalai Lama, given the name Lobsang Gyatso and installed at Drepung Monastery. His training began shortly thereafter. Under the guidance of several teachers He received a thorough education and went on to write extensively of Buddhist philosophy and the other traditional fields of knowledge. His collected writings total twenty-six volumes while His pure visions fill another two.

During His youth, Tibet was in turmoil. Following the collapse of the early Tibetan dynasty in the ninth century, political authority devolved into the hands of local lords. The lands of central Tibet remained divided until the thirteenth century, when Mongol hordes overran Tibet. Mongolians were to remain an important force in Tibetan politics for the next few centuries. In 1261, Godan Khan, the grandson of Genghis Khan, transferred power to the Sakya hierarch Drogon Chogyal Phakpa. Yet his successors would rule for just over fifty years before being overthrown by the Phakmo Drupas. They in their turn were displaced by the Rinpung administration, who later fell at the hands of the prince of Tsang in 1565.

In 1635, unrest erupted into civil war as rival Mongolian factions threw their support behind competing Tibetan camps. Eventually, the forces of Gushri Khan defeated the Chogthu Mongols and their allies, the administration of Tsang. Thus it was that in 1642, the twenty-five year old Dalai Lama was installed as the spiritual and temporal leader of Tibet. His reign, like His spiritual predilections, was notable for the diversity of its achievements: Under Him, the arts and sciences enjoyed generous patronage. His authority was acknowledged by the Manchu rulers of China. He established the dralha of Nechung as an official State Oracle. He recognized Lobzang Chokyi Gyaltsen as an incarnation of Amitabha and reserved the title ‘Panchen Lama’ for him and his incarnations. He built the Naga Palace with its exquisite murals depicting esoteric Dzogchen practices and restored the ancient imperial palace on Marpo Ri to create the famous Potala Palace of today.

From this brief list, one can see how the Great Fifth Dalai Lama was, in the words of E. Gene Smith, “a tolerant prince with a well-developed eclectic bent of mind.” He went to great lengths to reconcile the conflicts of the previous centuries and His commitment to the other Tibetan schools is well-attested in the relationships He cultivated with important lamas in the Sakya school and the various Kagyu denominations.

Yet His abiding interest lay with the Nyingma School. He received the transmissions for the Nyingma Kama from Zurchen Choying Rangdrol and was known as a dedicated practitioner of the Northern Treasures revealed by Rigdzin Godem. While in retreat on the Dynamic Energy of Vajra Wrath, the secret mind sadhana of the Northern Treasures, the Fifth Dalai Lama experienced a series of pure visions. With the help of His scribe and secretary Gelong Jamyang Drakpa, He recorded these as the Pure Visions Sealed with Secrecy.

Though the Great Fifth Dalai Lama passed away in 1682 at the age of sixty-six, His influence is still felt, both in the spiritual and temporal realms. 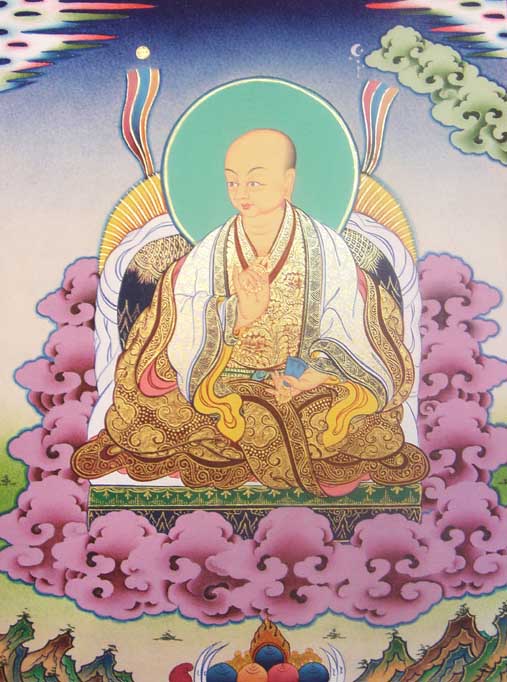