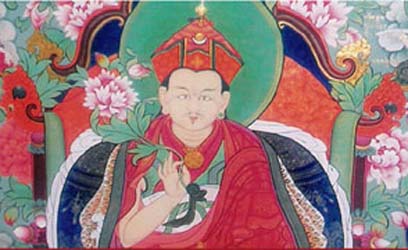 Terchen Nyidrak Garwang Drodul Lingpa (1647-1710), Although the life and liberation of this master is extremely vast yet, I will mention it briefly to revive the devotion by explaining briefly the birth of the treasure teachings of the great Vidyadhara, Dharma-king, Treasure Revealer, Nyima Drakpa Tsal. He was supreme among the fortune disciples to taste the nectar-like speech of Drubwang Dzogchen Pema Rigdzin and developed the strength of teachings and realization, and manifested the state of the self-realization Dharmakaya. Nyima Drakpa Tsal was empowered as the King of the Profound Treasure of the Vajra Transmission of the Second Buddha, Orgyen Guru Rinpoche. He was proclaimed and praised among the Great Treasure Revealers who came to dispel the darkness of the degenerate time of this world. Although from the primordial beginning he is enlightened. Yet, the way of his manifestation to liberate sentient beings of delusion, and coming into existence into this world was in this manner. 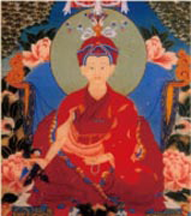 The profound proclamations from the words of Orgyen Dorjechang say that Nyima Drakpa Tsal is the incarnation of the sublime Avalokiteshvara. Guru Rinpoche says: “You are the Lotsawa, translator of Pema, an incarnation of Eased in Nature of Reality, Avalokiteshvara. The power of your motivation is immensely strong. At the peak of the Kaliyuga, in the time when it is tough to tame savage beings, you will come across this profound teachings, and you will guide many sentient beings to the path of liberation.”

Therefore, noble Avalokiteshvara is not like the Bodhisattvas of the tenth bhumi but Nyima Drakpa Tsal is the sambhogakaya, vajra speech of all Buddhas, yet appearing as the king of bodhisattvas he fulfills the benefit of all sentient beings. Such kind of precious qualities is hard to express or realize even by bodhisattvas, let alone by ordinary beings. It is the domain only of the omniscient enlightened mind.

However, to mention it briefly, when Guru Rinpoche came to Tibet, Nyima Drakpa Tsal was born as Lotsawa Luyi Wangpo, who translated many sutras and tantras into Tibetan. He served to write and conceal many profound treasure teaching. After a series of changes as various births in the different intermediate existences he reappeared as the Great Terton.

Also in the Pema Kathang says:


Incredible will be his form and clothing,
Incredible will be the teachings of the doctrine.
The incredible imprint of the virtuous activities will appear,
The source of the treasure of three regions of Kham Sinmo
Without remains will be revealed as the sign appear.
He will appear as one called as Khampa Nyima Drak.

This kind of prophecy has been mentioned not just this once, but repeatedly proclaimed throughout many profound scriptures. Nyima Drakpa Tsal was born in the Nangchen region of Do Kham province to Jamme Yonpo Karma Namgyal and Laza Sonamtso in the 11th cycle Fire Female Pig Year (1647). He relied upon the lotus feet of Dzogchen Pema Rigdzin offering his possession, service and practice. He received the entire sutra and tantra teachings and moreover he received all the pith instructions like a vase completely filled and merged the mind of the teacher and student in union. Also he received the complete empowerments and instructions from many other non-sectarian doctrine holders.

Nyima Drakpa Tsal easily mastered practice of the contemplation and meditation without hearing. At 23 he was blessed by the Second Buddha, Guru Rinpoche. He saw Guru Rinpoche with the assembly of dakas and dakinis and received the prophecy for revealing profound treasures. Once when he went to visit to the sacred lake Gaya Dhari, which is known as the "Dark Red Rakta", from a boulder, smoke bellowed out and fierce flames started to blaze. Picking up a stick with his hand he placed it into the rock, which made a transparent unobstructed hole. As he held the first revealed profound treasure in three scrolls, wondering if it was a dream or reality, immense joy and happiness arose. At that time as prophesied by the dakinis he went to the Sinmo Dzong in Kham. Although at the very beginning to do his three year strict retreat in Kham Shak Dorje Nying Dzong, there was huge turbulence and disturbances from the nonhuman spirits, yet still seated in the perfection of the radiance of meditation and subjugation, through non-conceptualization, his meditation enhanced and his realization manifested as all appearance and sound arose as impartial self-appearances (rang snang). He summoned negative sights as fortune; received obstacles as accomplished blessings, and all appearances and existence arose as all encompassing purity. He repeatedly saw and met the vast deities of the three roots in reality or in his dreams and received their blessings.

In the year 1670, Nyima Drakpa Tsal again saw Guru Rinpoche and received the prophecies and directions of the profound treasures of time, signs and so forth and explaining detail directions through his vajra speech. Although he had completely achieved the state of the Four Bodies of Enlightenment and even though sentient beings did not understand the value of the precious treasure teachings, his heart was captured by the fortunate ones, who had the keenness to enjoy the profound treasure. With his undaunted faith to spread Buddhadharma and bring benefit and happiness to all beings in these degenerate times, in the year of the male Tiger as directed, he revealed the Three Roots Heart Essence from Sin Dzong Dorje Nying Dzong, along with Vimalamitra’s statue and other things. Moreover, he enjoyed the display of the purity of all appearances and had visions of the wisdom body of the Wisdom Dakini Tsering Dzomma almost at all times, which enhanced his meditation and practice. He took this wisdom dakini as his consort and immediately his realization became profound. Perfecting the radiance of the inseparability of bliss and emptiness, all abandonment and cultivation arose as the nature of great wisdom-bliss. Gaining power over wind and energy he traveled unobstructedly through rocks and cliffs, he flew like birds in the sky, he squeezed dry earth and rocks like soft clay leaving imprint in them. He saw everything that was hidden or obscured without any veil through his omniscient wisdom. He could understand the realization of other beings and so on. Inconceivable signs and qualities of the path arose in his wisdom heart giving birth to infinite miraculous display and omniscience.

Nyima Drakpa Tsal nurtured many beings that he had heard and seen and made connection with many fortunate ones and led them into the path of maturation and liberation. In the future of this fortunate eon he vowed that he would come as the 40th Buddha, the one called as the Drachen. He will be powerful with immeasurable compassion and stainless wisdom and all beings connected with him, will be liberated from cyclic existence. This is proven by the words of Guru Rinpoche, which says:

My emanation, a noble being,
Nyima Drakpa Tsal of Kham.
Not separate from me, the Lotus-born.
There is no separation because there is no difference.
All with positive connections will be enlightened and content,
And even those with negative connection will end cyclic existence.
So needless to mention more.

We need to understand that apart from the appearance of their bodies they do not have any differentiation as explained in the profound proclamation.

After demonstrating such vast and amazing miraculous display, seeing the end of beings to be tamed, in the second month of the Metal Tiger Year 1710, Nyima Drakpa Tsal dissolved his form body into the expanse of Dharmakaya and merged into Guru Rinpoche's pure land of Lotus Light.