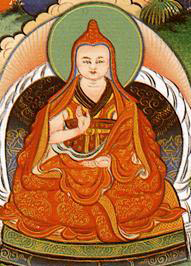 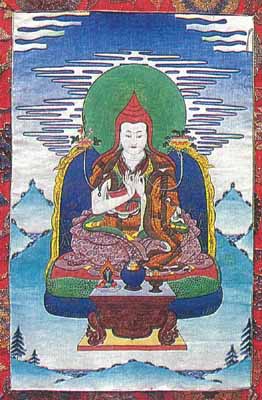 The Third Dodrupchen Rinpoche Jigme Tenpe Nyima (1865-1926),, born in Golok, as the son of Dudjom Lingpa, he had seven younger brothers, all of whom were famous tulkus; received teachings from Patrul, Khyentse Wangpo, Kongtrul, Mipham and Terton Sogyal. An important master in the Longchen Nyingthig

Jikmé Tenpé Nyima was born in East Tibet as the son of Dudjom Lingpa. He was recognized by the fourth Dzogchen Rinpoche, Mingyur Namkhé Dorje, and others, and was enthroned at Dodrupchen monastery, where he remained for the rest of his life. He received many teachings from Patrul Rinpoche, and also Jamyang Khyentse Wangpo, Mingyur Namkhé Dorje, Dzogchen Khenpo Pema Vajra, Mipham Rinpoche and Jamgön Kongtrul, and he became extremely learned in both New and Old Tantras. He built up the Dodrupchen Monastery, to the extent that it became a renowned centre for study and practice.

He gave teachings for many years, after which because of ill-health he lived in seclusion at a hermitage called Gephel Ritrö. Among his students was the great Jamyang Khyentse Chökyi Lodrö, who came twice for several months to receive teachings from him. He is known for the scholarly treatises he wrote on many subjects, for example his famous "Outline Commentary on the Guhyagarbha Tantra". The Thirteenth Dalai Lama said of him "a writer of his quality is very rare in this age", and HH the fourteenth Dalai Lama, who often quotes him and praises him as having written amongst the greatest scholarly works on the Nyingma teaching, calls him "a very special being... an amazing Lama free from bias concerning the views of Nyingma, Sakya, Kagyu and Geluk".

TEACHINGS ON THE OFFERING OF FLOWERS by Jigme Tenpe Nyima, the Third Dodrupchen Rinpoche Homage to the Buddhas and the Lamas.

Today we possess a human body, the pure basis (of life), something most difficult to acquire. We also have the unsurpassable field (or source) to make merits (the Three Jewels). Now we must plant the seed (of merits) in this supreme field, as much as we can, so that we will be able to collect enough provisions for our journey to our next existence (next life), when we will leave behind even our most cherished body.

If we judge ourselves by what we are doing today, there is not much hope for us to go beyond the realm of samsara. So for us (earning merits) is as it is said: "There is nothing more greatly needed than this."

In making offerings even of water or flowers we must have respect and then devote ourselves as it is said: "If we accumulate (even particle by particle), it will grow into ant-hills. If we use it up (even drop by drop), it will become exhausted (like) eye medicine.

The reason is that things build up if we accumulate them -- especially karma, which increases greatly. In particular, the results of even a single event of subtle karma, if it is based on the power of the Pure Lands, will be inconceivably vast and pervasive. Now, concerning flowers, they are exceedingly pure. They are rich with abundant qualities of design, color, fragrance, and soft touch. By nature they are a supreme source of joy in this world. There is nothing that is improper, even if flowers are offered by the hands of a great king.

In the summer, flowers of distinctive designs and colors, redolent with all kinds of pleasing fragrance beyond measure grow in great abundance on trees, fields, and lakes, covering this great earth. Even the most humble among us can collect them without fear of depletion. Moreover, flowers are substances that are extremely pure, as they can be obtained without engaging in any evil deed. They can be offered without (any risk that we may feel) miserly or regretful (afterwards). So the offering will be made with a pure mind at the beginning, in the middle, and at the end.

Even if a house is of inferior quality, if decorated with flowers, it will appear to be a bower. It will become the source of a "clear mind" (Sems dang ba), as in a heavenly world. So flowers are one of the powerful offering materials. A "clear mind" has many other qualities. The Lion of Speech says, “If you live in a house decorated with flowers, your mind will abide (in calmness) and attain (spiritual) fruit." Even celestial beings consider flowers to be the most noble offering substance. According to Lalitavistara-sutra, celestial beings offered flowers to the Buddha as soon as he attained enlightenment. In the Pure Lands, too, flowers are valued as the most sacred substance for offering. Amitabhavyuha-sutra says, Holding various colored flowers With sweet fragrance in their hands, Human beings and gods offer them To Amitayus, the supreme leader of beings. Likewise, it is also said that when the noble Sadaprarudita Bodhisattva saw Dharmodgata and when Manibhadra saw Lord Maitreya -- first they offered flowers to them. In many sutras it is said that when the Buddhas of different Pure Lands exchange gifts, they send flowers to each other.

Here are the merits of offering flowers in brief: In Zamatog Tawu'i tam it is said, If you make offerings by showering Excellent flowers upon the Sangha, you will enjoy wealth greater than that of Indra. You will become beautiful as the lord of the lotus. You will become renowned with supreme fame. You will instantly be victorious over All foes, all the time. You will become the lord of the land. This is to say that (as the result of offering flowers) you will enjoy an abundance of wealth, an attractive body, fame, victory over foes, and glory. "Sangha" is mentioned above just as an example of an object of offering. Quoting Puspakuta-dharani, Siksasamuccaya says, "The merit of tossing a single flower into the sky and thinking (of it as an offering to) the Buddha is greater than making offerings of celestial food and clothing to as many Pratyeka-buddhas as there are particles of dust on the earth. " Both Bhadramati-pariprccha-sutra and Vimala-pariprccha-sutra from Ratnakuta-sutra say, "If you fill your hands with lotus and utpala and offer them to the Buddha, you will obtain a miraculous birth in a precious great lotus in front of a tathagata (Buddha). Vinaya)-sutra says, The value of merits accumulated by a learned one, who piles up flowers with a joyous mind (in front of a) stupa of the Buddha, Will be of incomparably greater value than as much jambu river gold As can fill a hundred thousand vessels. This means that we cannot compare the value of the benefits of offering flowers to the Buddha even to the value of a hundred thousand vessels full of jambu river gold. We should learn more from many other sutras such as Avalokana-nama-sutra.

(The sutras also) say that we will earn as many merits making offerings to a Buddha who is alive (and present before us) as we will to a Buddha who has already attained nirvana and about whom we are thinking.

Also, offering mandarava flowers from the heavenly realms will certainly have the same merits as offering ser-chen flowers [perhaps butter cups]. It is not the material, but the attitude of offering whatever we can that makes the main difference in creating merits. It is like the stories of the offerings made by King Prasenajit and the lamp offering made by a beggar lady. Thinking about these benefits, it is good to enter into (the practice of offering) with an attitude of great joy.

Karmasataka-sutra says that Anathapindika paid more than 100,000 gold coins for a lotus that grew in the King's garden in order to offer it the Buddha. Lord Atisha said, "In India, we don't have shang-dril flowers (a special flower that grows in Tibet). If we had them, I would have bought them with gold (for offering)." So if people of such inexhaustible merits have strongly emphasized (making flower offerings), there can be no question of its importance for people like us. A caveat: it is not proper to offer poisonous flowers.

The flowers should be fresh without any defects. Find the flowers in a clean location. First examine whether there are any insects on them. If there are none, then wash your face and hands and pick the flowers. Then arrange them individually (or arrange just their heads) or arrange them as garlands, as taught in Bodhicaryavatara. You can display them either way. If you are arranging the flowers (or their heads) individually, fill your palm with them. If you are arranging them as garlands, raise them up with both your hands. Then, first, remember the qualities of the Buddha. If you don't know the qualities of the Buddha, just think of the Buddha in your mind.

Ratnolka-sutra says, “Think: ‘May these flowers become canopies, and so on.’” Triskandhaka-sutra tells us to think: "May this ornament of flower canopies decorate all the dharma-spheres, and so on." We should accordingly offer flowers thinking, "May the infinite Pure Lands -- the mandalas of the tathagatas of the ten directions and their retinues -- be (filled with) canopies, houses, and hangings made of flowers. May clouds of light of precious jewels and flowers arise, and may each of them shower flower ornaments that fill the whole expanse of space. May they remain forever." Also, join your palms together and respectfully prostrate as Amitabhavyuha-sutra says: "Stand up and facing West, throw flowers and prostrate by joining your palms together."

If you are offering flowers to images and stupas, first sweep the surrounding area. If there are old flowers (from previous offerings) around, throw them out in a place where people will not step over them. Then make your offerings. The sutras say that there is as much merit in throwing away old flowers as there is in arranging new ones. At the end, remembering the benefits of offering flowers as taught in Ratnakuta-sutra quoted earlier, from the depth of your heart, say aspiration prayers. If you are familiar with it, recite the twenty-stanza prayer in Ratnamala.

Meanwhile, inspire others, too, so both you and they make offerings together. Also give flowers to older people who are unable to go and collect them, such as your parents, and let them make offerings. Skillfully introduce stingy people and children to the practice of offering, too, if they are amenable to it. While traveling on the road, if you see even a single stone with "Om Mani Padme Hung" on it, pick up a flower and offer it to the stone. If you train yourself in offering in various ways, the strength of your merits will increase. As it is said,

The moon and stars could switch places. The mountains and earth could move. Even the nature of the sky could change. But you (Buddha) never uttered a word that is not true. At the request of a bouquet of flowers that asked, "Please write a few clear words (about flower offerings)," an old man known as "Ocean of Thoughts, Endless Chatter" wrote this in the temple of a joyful hermitage where the bells of shang shang5 dancing in the wind.