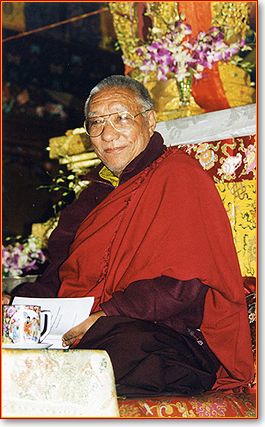 Khenpo Tsultrim Gyamtso Rinpoche is a prominent scholar yogi in the Kagyu tradition of Tibetan Buddhism. He teaches widely in the West, often through dohas (songs of realisation) composed by Milarepa (to whom he is often compared) and other masters of the past.

Rinpoche was born in 1934 to a nomad family from Nangchen, Kham (eastern Tibet). He left home at an early age to train with Lama Zopa Tarchin, who was to become his root guru. After completing this early training, he lived the ascetic life of a yogi, wandering throughout Tibet and undertaking intensive, solitary retreats in caves and living in charnel grounds practicing Chod. At Tsurphu Monastery, the historic seat of the Karma Kagyu lineage, Rinpoche continued his training with the lineage head, the 16th Gyalwa Karmapa, and other masters.

In the wake of the Chinese Communist invasion of Tibet in 1959, Rinpoche fled Tibet, leading a group of buddhist nuns over the Himalayas to safety in Bhutan. He subsequently went to northern India, where he spent the next nine years at the Buxador Tibetan Refugee Camp. Here he studied and mastered Buddhist scholarship and was awarded a Khenpo degree from His Holiness the 16th Karmapa and the equivalent Geshe Lharampa degree from His Holiness the 14th Dalai Lama. At the direction of the Karmapa, he subsequently settled in Bhutan, where he built a nunnery, retreat center, and school.

Along with Khenchen Thrangu Rinpoche, Khenpo Rinpoche served as the principal teacher at the shedra (monastic college) at Rumtek Monastery, the seat of the Karmapa in exile. As such, he trained all of the major lineage holders of the Karma Kagyu lineage. He also has taught extensively around the world over the last twenty years.

Rinpoche is also the the principal teacher of the Dzogchen Ponlop Rinpoche, and is very close to his Nalandabodhi organization. He also teaches extensively in the Shambhala Buddhist community.

At the request of H.E. Jamgon Kongtrul III, Khenpo Rinpoche successfully initiated and guided the Mahamudra retreat centre and the Rigpe Dorje program at Pullahari, fulfilling the intention of H.E. by creating an environment for study and practice.[1]