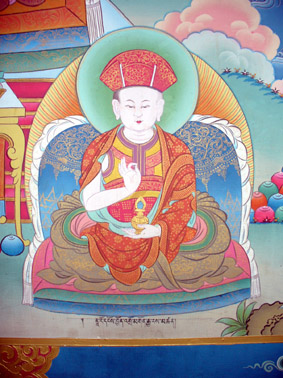 Tsangpa Gyare Yeshe Dorje was one the foremost disciples of Lingje Repa Pema Dorje, and established the Drukpa Kagyu school.

Tsangpa Gyare's father was Gyazurpo Tsape (rgya zur po tshab pe) and mother Marza Darkyi (mar bza' dar skyid). The moment he was conceived his mother had a dream in which she saw the sun rising from her body and meeting with highly realized beings. He was born, the youngest of seven children, in the Iron-Female-Serpent (1161) year at Khule Saral (khu le) in Upper Nyang (myang stod).

Tsangpa Gyare met Lingje Repa when he was grown up and mastered the Six Doctrines of Naropa and Mahamudra under him. In 1180 Tsangpa Gyare founded the Ralung Monastery (rwa lung), which was for many generations the principal seat of the hierarchs of the Middle Drukpa Kagyu school, as well as the monasteries of Longdol (klong rdol) and Nam-Druk (gnam ’brug), after which the lineage was later named. Tsangpa Gyare became a widely reknowned teacher with thousands of disciples. He discovered the "Six-fold cycle of Equal Taste" (ro snyom skor drug), a cycle of instructions that had been hidden by Rechungpa to be rediscovered at the appropriate time, and became thus known as a treasure revealer (gter ston).

The Drukpa lineage of Tsangpa Gyare became famous for the yogic asceticism of many of its adherents and the profundity of its spiritual teachings.

Tsangpa Gyare passed away at the age of 51. When his body was cremated it is said, his skull bore the images of Arya Manjusri, Avalokiteshvara and Vajrapani. At that time the vertebrae bones of his spinal column also transformed into self-arisen images images of Arya Avalokitesvara. A number of these Rangjung Kasarpani images survive to this day and are considered to be the most sacred relics of the Drukpa tradition.

Drogon Tsangpa Gyare is said to have had over eight thousand disciples of whom more than two hunderd and eighty became enlightened yogis. Amongst his disciples, Gyalwa Gotsangpa Gonpo Dorje (1189-1258) spread the Drukpa tradition in Western Tibet and his lineage came to be known as the "Upper Drukpa" (stod 'brug) school. Tsangpa Gyare's disciple Choje Lorepa Wangchuk Tsöndrü (1187-1250) established the "Lower Drukpa" (smad 'brug) school, and is nephew and disciple Dharma Senge Sangye On (1177-1237) founded the "Middle Drukpa" (bar 'brug) school which became the main branch of the Drukpa tradition. Sangye Onre's disciple, Phajo Drukgom Zhigpo (1184 - 1251) from East Tibet, went to Bhutan and founded the first Drukpa monasteries in Bhutan at Phajo Ding and Tago.