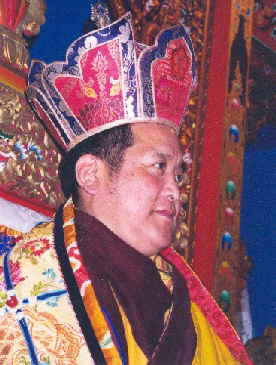 Kyabje Dzogchen Pema Kalsang was born in 1943 in Dege, Dzachuka, a part of Kham, Eastern Tibet. He is the third incarnation of H.H. Dzogchen Pema Benzar, lineage holder of Dzogchen Nyingthik. He was born to a common nomad family whose ancestry has an unbroken line of recognised Rinpoches. His birth was marked with many auspicious signs and as a newly born child he could recite the mantras of Guru Rinpoche and Avalokiteshwara due to imprints from his past lives. This generated such devotion amongst the local people that they were moved to tears.

At the age of two his Dharma brother from his previous life, Dzogchen Kongtrul Rinpoche came to his area to give teachings. The young Pema Kalsang cried so much that his mother was forced to take him to see the Rinpoche. The moment the child saw him he ran to his laps and hugged him with great joy. Kongtrul Rinpoche told Pema Kalsang's mother to take very good care of her son as he'd had a dream the night before linked with the child indicating that he was the reincarnation of a Rinpoche. Kongtrul Rinpoche quickly returned to his monastery to inform Dzogchen Jigdral Changjub Dorje and also had a note sent to Jamyang Khyentse Chokyi Lodro. They both recognized the boy shortly afterwards as the third incarnation of H.H. Dzogchen Khenchen Pema Benzar.

At the age of eight he began his primary education in Dza Jangma Retreat Centre, where a Khenpo taught him personally. In this period he also received the ordination as a Getsul. In 1953 he was invited to be enthroned according to tradition in Dzogchen Monastery, one of the six principal Nyingma monasteries and the source of Dzogchen teachings. There he received teachings on Sutrayana, Vajrayana, transmissions, empowerments and secret instructions from many highly realized masters. These included Khenpo Lhagong, a practitioner of Dzogchen Longchen Nyingthig, who attained enlightenment through life long retreat; Khenchen Yonten Gonpo, an emanation of Samantabhadra; Jigdral Changjub Dorje; Jamyang Khyentse Chokyi Lodro; Khenchen Pema Tsewang and Khenchen Thubten Nyendrak. Khenchen Yonten Gonpo introduced him by empowerment into Rigpa, the true nature of mind. Thereafter Jigdral Changjub Dorje named Pema Kalsang Rinpoche his successor as the throne-holder of Dzogchen Monastery. On reflection he considers this period the most perfect and happy of his life.

Shortly after that in 1959, Tibetan religion, culture and government were overthrown. His monastery was destroyed and his people were killed or scattered and he himself was imprisoned. Two years later he was released from prison but not from the control of the occupying system, and subsequently spent 30 years in forced labour. Although he was living under conditions unconducive to Dharma, he remained unaffected and continued to study and practice secretly.

In 1983, with the change of the situation in Tibet and the revival of Tibetan culture and the impeccable Buddha Dharma, Pema Kalsang Rinpoche was able to re-establish Dzogchen and other monasteries as he had always hoped to. Unfortunately, the following year while being engaged in this work he was involved in a car accident and was seriously injured. The other party involved gave him compensation money to support himself for the rest of his life. However he used his money to begin rebuilding and enlarging Dzogchen Shri Singha, an ancient and famous Buddhist university where he has now educated thousands of Dharma students. In doing so he has brought back light and the sound of Dharma to a holy place that had been dark and empty for 30 years.

He has also helped to build and develop Shedras (Buddhist universities) and Drubdras (retreat centres) in Dorje Drak, Mindrolling and Palyul, three of the six principal monasteries of the Nyingma tradition, as well as in Samye and Drugon Nyima Jangra and many more, sending Khenpos (Buddhist professors) to teach in these centres. He himself gave empowerments and teachings of Dzogpa Chenpo and recognised many reincarnations of Rinpoches, about 25 in total.

Since 1998 Pema Kalsang Rinpoche has been focussing with some urgency on three main areas:

Firstly collecting ancient Buddhist statues, scriptures and important cultural items that are rapidly disappearing from Tibet. A temple serving as a Tibetan cultural exhibition hall called "The Golden Lotus Ornament of Tibet" is being built to display these treasures.

Secondly he has established and funded an organisation called the "Kalsang Awards for Merit" to revive and enhance Tibetan Culture by rewarding Tibetan scholars and writers whose work excels.

And thirdly he is trying to build as many schools as possible for the young generation of Tibetans to provide them with a good education as well as constructing accommodation for elderly and disabled people.

Pema Kalsang Rinpoche has been helping others with boundless compassion all his life and is a brightly-lit guiding lamp of inspiration for others on the path of Dharma. May he enjoy a long and healthy life and may all his virtuous swiftly be fulfilled.

Published by the Shri Singha University of Rudam Dzogchen Fountain of Wisdom and Learning in the Land of Snows.