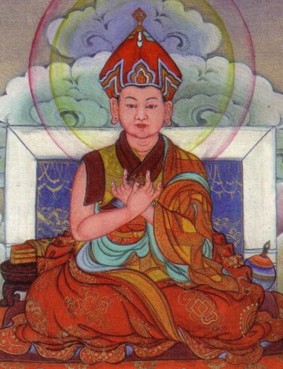 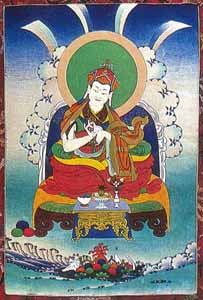 The First Dodrupchen Rinpoche Jigme Trinley Ozer (1745-1821), was born in the Do valley of Golok, and from childhood onwards he had many pure visions and displayed extraordinary signs. The ceremonial cutting of his hair was performed by the second Shechen Rabjam Gyurme Kunzang Namgyal (1713-69), who gave him the name Kunzang Shenpen. He received teachings from about twenty lamas, including the third Dzogchen Rinpoche Ngedon Tenzin Zangpo (1759-92).

Following Dzogchen Rinpoche's instructions, he carried out a seven-year retreat at Upper Gang-Trö, near Dzogchen monastery, during which he was helped by the Protectress Tseringma. Dzogchen Rinpoche also prophesized that the master with whom he had a special relationship by virtue of his past karma, and who would figure as his principal teacher was the great vidyadhara Jigme Lingpa. So at the age of thirty-nine Dodrupchen Rinpoche travelled to central Tibet and met Jigme Lingpa at his residence at Tsering Jong monastery in the Yarlung Valley. Jigme Lingpa recognised him as the future holder of his teachings, as had been foretold by Guru Rinpoche.

He later became the spiritual teacher to the Queen of Derge and her son, founded a number of monasteries, including his seat at Yarlung Pemakö in the Ser valley, and spread the Nyingtik tradition in Amdo and as far as the Kokonor region of Mongolia. Dodrubchen was a 'treasure revealer' (terton) who discovered his own mind terma, he was recognised by Jigme Lingpa as the incarnation of Prince Murum Tsenpo, a son of King Trisong Detsen. 'Dodrupchen' literally means 'The Great Siddha from Do valley'. Amongst his disciples were the greatest Dzogchen masters of the time: the Fourth Dzogchen Rinpoche Migyur Namkhe Dorje, Do Khyentse Yeshe Dorje, Gyalse Shenpen Thaye and Dola Jigme Kalzang. He blessed Paltrul Rinpoche (1808-87) as a child, making prophecies concerning his future eminence and gave him his name.

དུས་གསུམ་ཀུན་མཁྱེན་པདྨ་འབྱུང་གནས་ཀྱི། །
Empowered by Padmasambhava, omniscient in past, present and future,
ཟབ་གཏེར་བདག་པོར་མངའ་གསོལ་འཁོར་ལོས་བསྒྱུར། །
As master over the profound treasures, universal King of Dharma,
སངས་རྒྱས་གླིང་པའི་ཡང་སྤྲུལ་སྦས་ཚུལ་འཆང༌། །
The reincarnation of Sangye Lingpa, you who follow a hidden way,
ཀུན་བཟང་གཞན་ཕན་ཞབས་ལ་གསོལ་བ་འདེབས།། །།
Kunzang Shenpen, at your lotus feet I pray!