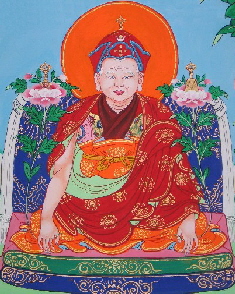 All Knowing Jigme Lingpa made the following prophesy regarding Migyur Namkhe Dorje:

What was secret has now become known.
There are three vajra emanations,
Two hidden in central and surrounding Tibet.
When the time is ready to benefit beings,
A great pure mind emanation will arise,
In a snowy mountain place to the west,
By the banks of a great gold-bearing river,
To a father named Sonam, mother Norzin.
This I know through wisdom's eye.

Dzogchen Migyur Namkhe Dorje Rinpoche (1793-1870), The birthplace, parents’ names and other details of Migyur Namkhe Dorje birth were clearly prophesied, and in 1793 a baby boy was born in a place called Denkok, three days ride to the west of Dzogchen. The first word the child uttered was ‘Dzogchen, Dzogchen’ which he repeated again and again.

At the age of seven he was officially recognized as the incarnation of Dzogchen Rinpoche and invited to the monastery to take his place on the golden throne. At fifteen he was ordained as a novice monk by the Third Shechen Rabjam Rigdzin Paljor Gyatso. Studying under many learned tutors, including Jigme Gyalwe Nyuku, Tulku Nyidruk and Lama Ngawang Loden, Migyur Namkhe Dorje received teachings on the collected sutras and tantras of the Tibetan Canon. He also received the complete empowerments, teachings and personal instructions of the four classes of tantra. Most importantly, the outstanding lama Namkha Tsewang Chodrup passed on the complete empowerments and instructions of the Heart Essence of the Dakini, Khandro Nyingthig from Dzogchen Rinpoche Pema Rigdzin's lineage.

In his twentieth year Migyur Namkhe Dorje went to Master Dodrup Jigme Trinley Ozer for teachings. When the party first arrived at the master’s residence, they saw a very old monk standing outside who said to them ‘I’ve been waiting for you’, and then vanished. They then went up to the master's room and saw the same old monk sitting on a high throne drinking beer from a skull-cup. Paying his respects, Migyur Namkhe Dorje moved closer to the master who, handing him a skull-cup of beer, said ‘Enjoy some!’ His tutor replied that the young Rinpoche was ordained. ‘You may be a monk but drink!’ exhorted the master. So Migyur Namkhe Dorje complied and at that very instant his ordinary perceptions ceased and all the realizations of the blessed lineage were transmitted and he achieved the truth of the path of seeing.

Rinpoche went on to receive amongst others the boundlessly profound teachings of trekcho and togal of Dzogpa Chenpo Longchen Nyingthig from Rigdzin Jigme Lingpa, and following the Great Kunkhyen Yeshe Jegar he received the extremely close lineage of the Secret Heart Essence.

Migyur Namkhe Dorje spent his entire life either practicing or expounding the great Dzogpa Chenpo teachings. He was famed all over Tibet as having realized the great perfection and it was he alone who conducted the identification of new tulkus in the regions of Kham and Amdo. Even when nomad children went looking for their lost herds, they would first go to him for a prediction as to where they should look.

The Great Master Patrul Rinpoche at that time lived in Yamantaka Cave deep in the Dzogchen Valley and every day would make his way on foot to the monastery far down the valley to offer one hundred prostrations to the master, saying that in this degenerate time he was the only master to have completed the four visions of the great perfection to reach the exhaustion of phenomena.

At one time three monks from Amdo who were making their way to Lhasa lost the road and arrived near Dzogchen Monastery, stopping to have something to eat. One of the monks remarked that Dzogchen Rinpoche was said to have unobstructed clairvoyance as pervasive as the wind. ‘Why don't we put it to test?’ another said. ‘Let's pretend that our torn bellows is a sick friend and go to ask the lama for his advice how he can be helped.’ So two of them went to the great Rinpoche saying ‘We are four traveling to Lhasa but one of our group named Tashi Tsering is sick, he’s having difficulty breathing. Please tell us if his life is in danger and what medical treatment he should receive.’ The master replied with clear knowledge of the situation ‘Bellows Tsering’s sickness doesn’t need the Medicine Buddha's help, go find a needle and thread!’ Regretfully and with great fear the monks left quickly.

Around the same time in the Nyarong district of Kham there was a cruel demon-like man who showed not the slightest bit of faith in tulkus or the dharma. He spent his time killing and stealing, living the life of a warlord and bandit. For fun he would burn down monasteries or, having tempted children into his house with yoghurt, would proceed to throw them off the roof. So when the people of Dzogchen got word that he was coming with his army everyone was terrified. Some of the lamas in charge of the monastery went to the Great Rinpoche to let him know that Gonpo Namgyal was coming the next day. They explained carefully that if he did come there was bound to be trouble. ‘So,’ they continued, ‘rather than speaking frankly and truthfully as you are used to doing in your impartial wisdom, we think it best to try to appease him with more congenial worldly talk, otherwise the monastery will be in great danger.’

The following day the army arrived as expected. However they didn't stop to talk with those in charge of the monastery but continued straight up into Rinpoche's private quarters. Upon bursting in and seeing the master, the warlord immediately asked, ‘Where will I be reborn when I die?’ ‘There is no place for you to go other than straight to vajra hell,’ the master replied. ‘That being so,’ the warlord continued, ‘if I go with my army to Lhasa, will I be able to seize control of the government?’ ‘You will only get as far as Chamdo,’ came the reply. This pleased the warlord. ‘Now that’s what a lama should be like! Free from worldly politeness.’ He then explained that all the lamas he had ever come into contact with tried to humor him with their mundane platitudes. ‘This is the first time that a lama has ever spoken truthfully to me!’ he exclaimed. With faith and devotion he paid respect to the master, pleading that he must do something to prevent himself from being reborn in hell. In response the lama assured him that he would not fall into hell for three lifetimes. Later, troops from Central Tibet and Dege burnt down Gonpo Namgyal's fortress, killing him. However indications showed that his following three rebirths all occurred near Dzogchen Monastery. 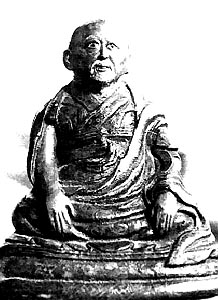