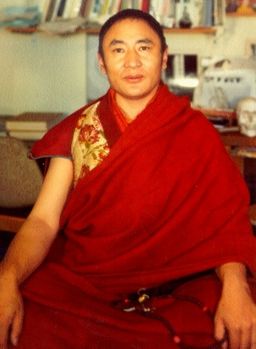 Karma Thinley Rinpoche, (b. 1931) is an important lama of the Kagyu and Sakya traditions of Tibetan Buddhism active in the west highly regarded as a meditation master, scholar, and poet.

Karma Tinley Rinpoche was born in 1931 in the Nangchen (nang chen) principality of Kham. His mother was a member of the noble Bongsar clan of Nangchen and his father a famous yogin disciple of Jamgon Kongtrul the Great. While Karma Tinley was an infant the young 16th Karmapa Rangjung Rigpai Dorje who was visiting Nangchen indicated that he was the fourth incarnation of Karma Tinleypa one of the main teachers of the 8th Karmapa, Mikyö Dorje. At the age of two years he was also formally recognized by the 40th Sakya Trizin Drakshul Trinley Rinchen (drag shul phrin las rin chen), as the incarnation of the Sakyapa master Beru Shaiyak Lama Kunrik, considered to be a tulku of the great Vairotsana.

During his childhood and youth, Rinpoche was able to receive numerous teachings from many renowned lamas. From his uncle, the famous yogin Jigje Lama ('jigs byed bla ma), and his two great-uncles Taklung Shabdrung Rinpoche (stag lung zhabs drung) and Taklung Pangchog Rinpoche of Riwoche he received numerous Kagyüpa and Nyingmapa precepts. From Khenpo Khangsar and Ngawang Tashi Chöphel he received a wide range of teachings of the Sakya tradition. During this period Rinpoche also completed many retreats and mastered the traditional crafts (zo rig) and sciences including medicine and astrology.

Rinpoche inherited the Sakya monastery established by his predecessor Beru Kunrik, but spent much of his time at the Karma Kagyu monastery established by his uncle, Bongsar Namkha Dorje which was to become the new seat of Beru Khyentse Rinpoche. Older Tibetans from that part of Nangchen recalled Karma Tinley Rinpoche as a remarkably brilliant young lama, with a remarkable memory who they say was able to memorize an entire text within a single day and comprehend its meaning. Those who were children at the time remember him more as an inexhaustible teller of legends and stories. Rinpoche's scholarship earned him the degree of Khenpo at the famous shedra of Riwoche. Like the 2nd Karma Tinleypa, Palkhang Lotsawa, he became particularly renowned for his mastery of Language, Grammar and Poetry.

In 1959, Rinpoche left Tibet accompanying HH Karmapa traveling to India via Bhutan. In 1961 Karmapa appointed him as an abbot for the Kagyu, Sakya and Nyingma traditions at the Young Lamas' Home School for Tibetan tulkus established by Mrs. Freda Bedi in New Delhi. Chogyam Trungpa Rinpoche and several other Lama's who were to be significant in the transmission of Tibetan Buddhism to the West stayed at this school.

Later Mrs Bedi and Rinpoche together established a nunnery in Dalhousie, named Karma Drubgyud Thargye Ling, after his monastery in Nangchen. The young Lamas' Home School was also shifted to Dalhousie, and Karma Tinley Rinpoche was appointed abbot of both the nunnery and school by Karmapa. This nunnery was eventually moved to Tilokpur and Rinpoche remained as abbot.

In Dalhousie Karma Tinley Rinpoche also helped HE Kalu Rinpoche establish a three-year retreat center for the Shangpa Kagyu and Karma Kagyu traditions. At that time he was also able to receive the complete Dam Ngak Dzo and many other teachings from Kalu Rinpoche. From the Eighth Khamtrul Rinpoche who was also staying at Dalhousie he received many teachings of the Drukpa Kagyu tradition. Rinpoche traveled to Karsha in the Lahoul and Spiti district to receive teachings on Rechungpa's Six Cycles of Equal Taste from Kartang Kunga Rinpoche a disciple of Shakya Shri. At Kartang Kunga Rinpoche's request, Karma Tinley re-established the vinaya lineage in that area.

In Dalhosie during the 1960's Karma Tinley Rinpoche was one of the first Tibetan lamas to teach Western disciples who included the Canadian poet David Cull, the English nun Tenzin Palmo, the American nun Lodro Palmo.

In 1967 he received the complete cycle of The Path and Its Fruit, from H.H. Sakya Trizin at Sarnath.

Later, at the suggestion of Karmapa and Chögyam Trungpa Rinpoche, James George, the Canadian High Commissioner to India invited Rinpoche to come to Ontario, Canada as the Lama for a group of Tibetans being resettled there. In 1971 Rinpoche settled in Canada accompanying this group of Tibetan refugees as their spiritual teacher and a year later founded the Tibetan Society to introduce Tibetan culture to Canada. In 1973 Rinpoche founded Kampo Gangra Drubgyud Ling meditation centre in Toronto, named after the first Karmapa's monastery in Kham. That same year Rinpoche spent three months in Scotland where he met his English student Lama Jampa Thaye for the first time.

In 1978 Rinpoche returned to India to receive the Rinchen Terdzod, the famous collection of Nyingma treasure cycles, from H.H. Dilgo Khyentse Rinpoche. Four years later he made his first return to Tibet for over 20 years traveling throughout Nangchen visiting his relatives and giving teachings. In 1983 Rinpoche received the Drubthap Kundu, the collected sadhanas of the new tantra schools, from H.E. Chogye Trichen Rinpoche in Lumbini.

Over the last twenty-five years Rinpoche has founded centres and taught extensively in Canada, the U.S.A., New Zealand and the United Kingdom. He has hundreds of devoted students, both Tibetan and Western. In addition to being an accomplished poet and artist, Rinpoche is a renowned historian, having written an authoritative history of Nangchen and (in English) The History of the Sixteen Karmapas. His major projects at the current time are the continuing supervision of his nunnery Tegchen Legshay Ling in Bodhanath, Nepal and the construction of Sangngak Phodrang in Nangchen.