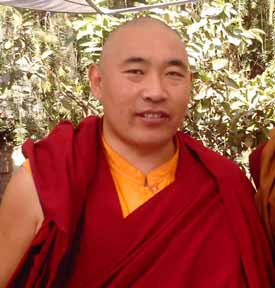 The third Chojor incarnation is Ngawang Jigdrel Chokyi Gyamtso Rinpoche. He was born in the Nangchen district of Kham amidst amazing signs on the tenth day of the fifth month of the iron male dog year, 1970. His father was Konchog Jigme and his mother was Pema Tharcho. From the age of nine he perfected his studies of spelling, writing and reading. At the age of eleven, he went on pilgrimage in both Tibet and Nepal, where he received from Tulku Urgyen Rinpoche the vows of refuge. Following that, having returned to Nangchen, he began his religious life at Lhalam Monastery. Then, at the age of seventeen, he entered the retreat center at Lachab Monastery where he engaged in practice for three years and three months. Subsequently, at Lhalam Monastery, he took up the responsibility of retreat master and for about six years practiced as much as he could. 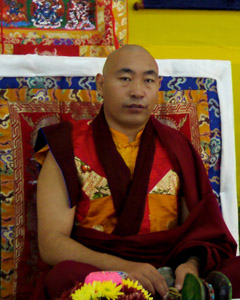 The Replies to the requests of Khatsatrapa Rinpoche states,

In your previous life, you were known as Dharmabhuti, Endowed with spiritual fortune, your homeland was the region of Chel. Whatever quality was spoken of, his was the most eminent. Additionally, you possessed the fortune of benefiting all.

The supreme deity, Guru Padmakara The yidam deity, Vajrakumara Through the force of the accomplishments of your past life Accompany you unceasingly, like a shadow In the aspects of dharmakaya, sambhogakaya and nirmanakaya. Whoever meets you will be led to the Lotus Light pure land.

Following the liberation of the previous incarnation, the reincarnation of Thraril Chojor Rinpoche was sought. At that time, Khyabje Trulshik Rinpoche, the Great Refuge and Protector and the glorious Gyalwang Karmapa, unanimously and unerringly perceived with their stainless wisdom that the prophesied boy would be known by the signs of being born in the Iron Dog year, a two day horse ride to the northwest of the monastery. He would be born as the son of a father with the name Könchok and a mother by the name of Pema. In accordance with this, the supreme emanation was found with certainty, free of all doubt. He was given the name Ngawang Jigdral Chokyi Gyatso, in order to accomplish great benefit for the teachings and beings for many years. In 1997, he arrived in Nepal, and for a few years acted as the tutor for the young incarnation of Dilgo Khyentse Rinpoche. Following that, he attended Thrangu Rinpoche's monastic college where he studied and reflected deeply on treatises of sutra and tantra. While in residence there, he capably performed his duty as an assistant instructor. From Thrangu Rinpoche, Jamgön Tai Situ, the Great Lord of Refuge Nangchen Adeu, Khenchen Tsültrim Gyatso, Ngaktrin Tulku and many other eminent masters he received empowerment, guidance and pith instruction of the [traditions] of the old and new schools, and has crossed to the far shore of the ocean of study and reflection. His life is one of ever increasing exposition, accomplishment and activity. This concise biography, gathered from authentic sources, was written down at Tarpa Lagoon by the one named Nyima Tulku. May it be virtuous.