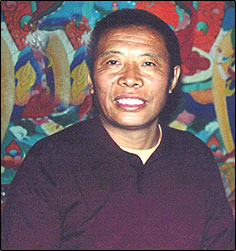 When Gochen Tulku Sang-ngag Rinpoche was three years old, his family and a large group of other people were harvesting hay in the fields. He was left sitting at the foot of a cliff. He left a very clear footprint in a rock as though the rock was made of soft clay. Because of this, people talked of there being a tulku in the valley, but no one was sure whose incarnation he was. Tulku refers to an "incarnation", in the sense of a buddha, bodhisattva, or an advanced practitioner (someone who has gained a degree of freedom) taking conscious rebirth for the sake of others.

The title Gochen Tulku would make it impossible for the young boy to be the tulku of Namchak as his parents had wished. His parents kept it quiet that their son was Gochen Tulku and not the Tulku of Namchak. Word got out and the community of Gochen Monastery sent Lama Tenpa of Drong to see Jamyang Khyentse Chokyi Lodro with a request that he formally recognize the Gochen incarnation. After visiting with Gochen Tulku Sang-ngag Rinpoche, Khyentse Rinpoche conferred the title of Gochen Tulku on him. However, at that time, the border troubles with the communist forces resulted in the Gochen Monastery (which lay on the border) being sacked so the traditional place for enthronement no longer existed. Accordingly, a lama named Nyima Odzer performed the enthronement and bestowed the refuge vow on Gochen Tulku Sang-ngag Rinpoche at Gadra Ritro, a subsidiary of the Gochen Monastery. At the same time, Nyima Odzer bestowed on him all the empowerments and oral transmissions of Tsasum Lingpa's teachings.

The title Gochen Tulku came about in the following manner. Initially there was a master named Gyalwa Chokyang, accomplished in the practice of Hayagriva, who was one of the nine heart children of Guru Rinpoche. One of his incarnations, a great terton (a revealer of hidden treasure teachings) named Drime Lingpa, was a contemporary of His Holiness the six Dalai Lama. Drime Lingpa studied with his principal master Rigdzin Tukchok Dorje, the son of the great terton Tsasum Lingpa, and devoted his life to spiritual practice, showing real signs of attainment. In particular, Drime Lingpa was graced with visions of Guru Rinpoche and his consort, who both prophesied his personal destiny, which lead to his revealing about four volumes of profound hidden treasure teachings. He had many students, including the seventh Chakzam incarnation and Rigdzin Jigme Lingpa.

When Drime Lingpa passed away, he prophesied that he would have two parallel rebirths, on in Bhutan and the other in the Eastern Tibetan province of Kham. The later was born in Doshul and named Gyalwa Gyatso. Gyalwa Gyatso founded Gochen Monastery. His incarnation was Pakpa Gyatso, followed by Tsewang Tendzin and a succession of incarnations up to Namkha Tsewang, the previous tulku. At present, Gochen Tulku Sang-ngag Rinpoche is holder of the title of the sixth Gochen Tulku.

When Gochen Tulku Sang-ngag Rinpoche was very young Lama Gadra Nyima Odzer of Gadra bestowed upon him the complete transmission of the hidden treasure teachings of Namchak, as well as the oral transmissions for the collected writings of Ridzin Tukchok Dorje. He was then taught to read and write. In 1960 he tried to escape to India with his master, but they were apprehended by communist troops and returned to their home region. From then until the Cultural Revolution, which began in 1969, he studied with his father, Nacho Asahi. He learned the family's tradition of religious rituals and liturgies, as well as traditional Tibetan medicine. During this time his practice and efforts to teach Buddhism to others was carried out in secret.

During the Cultural Revolution, the communist authorities, became aware of Gochen Tulku Sang-ngag's activities and imprisoned him for the next ten years. During this almost unbearably difficult time, he prayed constantly to the Three Jewels as his only source of hope. By some good fortune, he happened to be incarcerated in the company of many lamas, tulkus, and great scholars. It would have been very difficult to meet these individuals otherwise.

Since Gochen Tulku Sang-ngag Rinpoche was the youngest among them, his fellow prisoners treated him with great affection. He studied astrology with a Bonpo lama named Tsamkyap, and calligraphy and grammar with Lodro Taye, who had been the head administrator of the College of Dialectics in Chamdo. With Lama Karma Zangpo, he studied phowa (transference of consciousness at death) and the mahamudra meditation technique called negyu rigsum (awareness of mind at rest and mind stirring). Gochen Tulku Sang-ngag Rinpoche believed that the mahamudra meditation technique truly benefited his mind. It gave him a significant experience of well-being, clarity, and a nonconceptual state of awareness.

Gochen Tulku Sang-ngag Rinpoche was also lucky to have met Tulku Orgyen Chemchok, the heart son of Khenpo Ngakchung in prison. Tulku Orgyen Chemchok spent about nine months teaching him a one-hundred day course in the technique known as "mental training" (lojong), alternating these teaching with periods of directed mediation. After the nine month teachings, Gochen Tulku Sang-ngag Rinpoche spent time reciting the mantra for the Guru Yoga practice, using a knotted string in place of the mala beads that was forbidden in prison.

Tulku Orgyen Chemchok also taught Gochen Tulku Sang-ngag Rinpoche the steps of the Dzogchen, or Great Perfection, approach according to the oral lineage from the preliminary phase of "tearing down the hut of ordinary mind", through the main practice of "direct introduction to pure awareness of one's true nature" to the concluding phase of "nurturing one's meditative experience".

Gochen Tulku Sang-ngag Rinpoche believed it was due to the kindness of his masters that he was able to feel compassion instead of hatred toward his captors. No matter how much physical hordship he had to endure, his mind felt happy and at ease, which gave him profound confidence in his masters' instructions and the Buddhist teachings. He believed it was during his time spent in prison that his spiritual practice really began.

Eventually, the communist authorities relaxed their attitudes toward Buddhism and Gochen Tulku Sang-ngag Rinpoche was released from prison. He received official permission to restore Buddhism in his home region, but he was depressed by the difficult times and chose to practice in retreat. He wasn't able to stay in retreat for more than a year.

After reflecting on the situation of Buddhism in general, Gochen Tulku Sang-ngag Rinpoche undertook several projects to help restore the teachings. He and others built a new statue of Guru Rinpoche in a large tiemple; they repaired the temple at the holy lake of Yeshe Tsogyal and built a new statue of Tsogyal; they repaired the site of Yangdzong in the region of Drak, which had been the place that Nubchen Sangye Yeshe practiced, and built statues of Guru Rinpoche and two flanking figures.

The Tibetan government in exile, in collaboration with the Indian government, summoned all newly-arrived refuges from Tibet. Gochen Tulku Sang-ngag Rinpoche had to honor this directive. When he met with His Holiness the Dalai Lama, the Dalai Lama told him to stay with Khyentse Rinpoche, study the teachings, contemplate, and meditate. He was to remove any doubts he had.

Following His Holiness's advice, Gochen Tulku Sang-ngag Rinpoche spent the next fourteen years at Sechen Monastery in Nepal, serving His Holiness Khyentse Rinpoche. During this time Gochen Tulku Sang-ngag Rinpoche received empowerments, oral transmissions, and instructions deriving from the long historical tradition and the hidden treasure teachings of the Nyingma school, as well as the "Five Great Treasuries" of Jamgon Kongtrul and other cycles. In particular he received from Khyentse Rinpoche the transmissions for such cycles as the Nyingtik Yabzhi and Seven Treasuries of Longchenpa and the entire range of pith instructions for the Osel Nyingtik teachings, including the higher yogas (trekcho and thogal).

Gochen Tulku Sang-ngag Rinpoche found renewed confidence in the instructions his former masters had given him. He also was blessed to meet and receive empowerments and teaching from Trulshik Rinpoche, Chatral Rinpoche, Taklung Tsetrul Rinpoche, Dzongsar Khyentse Rinpoche, and others. He has also received teachings from Kalu Rinpoche, Tenga Rinpoche, Taklung Shabdrung Rinpoche and other masters of the Kagyu school. While staying at the Sechen Monastery in Nepal he served for seven years as vajra master and professor.

When Gochen Tulku Sang-ngag Rinpoche was ready to leave Tibet, His Holiness Dudjom Rinpoche told him "Your primary spiritual lineage is that of Namchak, so it is your personal responsibility to ensure the these teachings, which are dying out, continue. Don't let them down!" So as not to ignore his order, Gochen Tulku Sang-ngag Rinpoche collected some of the texts of the teachings from Tibet and published them with the sponsorship of Khenpo Palden Sherab and his brother Khenpo Tsewang Dongyal.

Later on, Khyentse Rinpoche reminded Gochen Tulku Sang-ngag Rinpoche that "To respect His Holiness Dudjom Rinpoche's directive, you should found a retreat center and publish texts." So he had the texts he recovered from Tibet entered on the computer, and founded Sang-Ngag Phurba Ling, a three-year retreat center in which the first group of retreatants finished the program without any obstacles.

Khyentse Rinpoche sent Gochen Tulku Snag-ngag Rinpoche to Almora in Northern India, and appointed him spiritual master to the nuns from Shugseb in Tibet. he taught them the preliminary practices of the Longchen Nyingtik cycle, but the conditions were hard there and the nuns were unable to stay long in Almora. In order not to ignore Khyentse Rinpoche's instructions, Gochen Tulku Sang-ngag Rinpoche began soliciting sponsorship for building a retreat center for the nuns in Nepal. The situation for nuns in general is deplorable and conditions of gender inequality are still the case. To help alleviate the difficulties nuns face and to counter such negative cultural conditioning, the late Bhikshuni Ngawang Chodron, and others helped establish the Turquoise Leaf Nunnery Project. In addition, a number of other projects are being considered for the future, such as the Ewam Shedra College and Ewam Publications, as well as plans for a hospital and a temple to honor great leaned and accomplished women masters.

Gochen Tulku Sang-ngag Rinpoche's plans for the future include the building of Sang-Ngak Drolma Ling, the principal center of Ewam in Montana. He also plans to travel to different countries, spreading the teachings as much as he can. He wants to foster both the study and practice of the Mahayana teachings and those that form the basis for the Vajrayana. For students who commit themselves to a long-term process of training, he will guide them, step by step, in the accumulations and purification of the preliminary practices; and in the main body of practice, which includes the stages of development, the stage of completion (including the higher yogic meditations and physical exercise), and the Dzogchen approach of trekcho and thogal. In teaching such students, Gochen Tulku Sang-ngag Rinpoche plans to teach in accordance with the unerring and noble path established by the masters of the three lineages, which provides the means for anyone to attain the omniscient state of buddhahood. But whether or not one gains such attainment or awakens to Buddhahood, depends primarily on ones own devotion and commitment to practice.