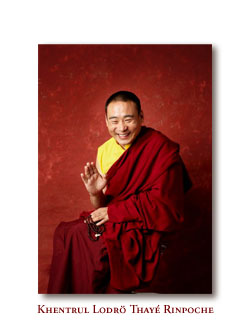 Khentrul Lodrö Thayé Rinpoche spent fifteen years studying at Kat'hog Monastery in eastern Tibet, His Holiness Khenchen Jigme P'huntsok's Serthar Buddhist Institute in Kardze, Tibet, and Penor Rinpoche's monastery Namdroling in India. Acknowledged as a scholar of the highest level, he twice received the title of khenpo (equivalent to a Doctor of Philosophy), making him a khenchen, or double doctorate.

He has taught for many years at monasteries in Tibet and India and is the abbot of Mardo Tashi Choling in eastern Tibet where he established a retreat center and shedra. He directs the education and spiritual practice of 300 monks, seventy advanced-degree candidates, sixty children, and twenty retreatants.

He was invited by Chagdud Tulku Rinpoche shortly before his death, primarily to create and teach a shedra program at Rigdzin Ling, as well as to teach in North America at the Chagdud Gonpa centers and elsewhere.

Khentrul Rinpoche is reknowned for his warmth, intelligence, knowledge, kindness, good sense of humor, directness, and the thoroughness and breadth of his teachings. He imparts a practical and comprehensive view and understanding of the teachings he gives.

"For those who have an interest in making a connection with me, here is a short introduction to the way and order in which I teach Dharma. Everyone wants to find ultimate and lasting happiness and to avoid even the slightest amount of suffering. Therefore, one needs to know the correct methods for achieving ultimate happiness and for eradicating suffering. There is no other method other than the profound path of skillful means - entering the path of Dharma.

When just entering the Dharma path, one should receive teachings that give an overall, foundational introduction to what Dharma is. Such teachings include how to practice Dharma and the beneficial effects brought about through Dharma practice. In this way, one is inspired and develops enthusiasm towards the path.

One should begin engaging in the actual practice of Dharma by entering the door to the path, or taking Refuge. Following that, one establishes a firm foundation by receiving in-depth explanations on how to meditate on the preliminary practices of Ngondro. Particularly, one receives pith instructions on the key points of meditation, including The Four Thoughts that Turn the Mind, The Four Immeasurables, and Guru Yoga practice. One should study and thoroughly engage in the mind training taught in texts such as Entering the Way of a Bodhisattva (Bodhicaryavatara) by Shantideva, The Thirty-Seven Practices of a Bodhisattva by Ngulchu Thogmed, and teachings on the Six Perfections among others.

Following that, one should receive the profound explanations on emptiness, which is the method for realizing that all phenomena lack any true identity; and buddha nature, the nature of one's mind, the timeless awareness that is naturally present within. One receives teachings on how to meditate on emptiness and buddha nature through the applications of calm abiding (shamatha) and special insight (vipashyana) meditation.

In regard to the extremely profound development and completion stage practices, one begins by receiving empowerments (wang) and reading transmissions (lung). Then, with the proper understanding of mantra recitation and deity meditation, one should engage in the practice of Mahayoga. Mahayoga is a skillful method for the development of pristine awareness (yeshe) in one's mind stream. After that, one cultivates the practice of Anuyoga (tsa lung) by relying on subtle channels, energy, and vital essence. This is also a skillful method for developing pristine awareness in one's mind stream.

With that basis, one receives transmission on the most profound practice of the Great Perfection dzogchen, [[[atiyoga]]], followed by teachings on some concise explanatory treatises. The way to receive pointing-out instructions is on an individual basis. The lineage of Great Perfection teachings has been passed down from one accomplished Vajrayana master (vidyadhara, rigdzin) to the next up until my own root teachers. From them, I received great blessings and pith instructions on a one-to-one basis in accordance with the lineage of extremely profound transmission.

In order to understand the essence of Great Perfection practice, one must have previously developed a firm foundation of study, contemplation, and meditation in all of the aforementioned practices. This is the definite order, the sequence of training. Without that, there is no effective method for developing correct practice. If one practices successively in this way, there is no need to have any doubts. The beneficial effects of the path will be experienced first-hand and the results of Dharma will be swiftly accomplished."