Combined Accomplishment of the Four Deities 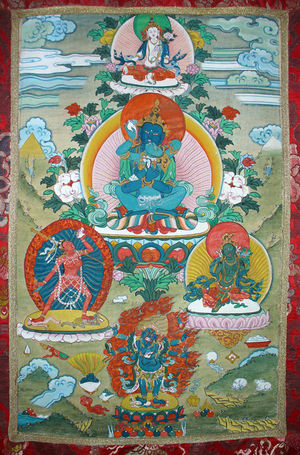 The Combined Accomplishment of the Four Deities

The Combined Accomplishment of the Four Deities

An elaborate guruyoga practice, one of the core practices of the Shangpa Kagyu tradition, focusing upon the idealized form of the guru as Buddha Vajradhara. The four deities surrounding him are the Six-armed Mahakala, Vajrayogini, Avalokiteshvara and Green Tara. In the tradition there are two empowerments for the practice, one for the practice itself and one among the Thirteen Empowerments of the Protector.

The practice originates with the Indian Mahasiddha Shavaripa and was transmitted to Khyungpo Naljor, the founder of the Shangpa Kagyu tradition, by both Maitripa and Rahula. Apparently Sukhasiddhi also held a lineage for this practice, but it is not quite clear whether Khyungpo Naljor received it from her as well or not. Shavaripa had a vision of the Six-armed Mahakala while meditating in a cave not far from Bodhgaya. Soon thereafter Vajrayogini, Avalokiteshvara and Green Tara appeared to Shavaripa as well and, as the protector before them, offered their sadhanas to him. He then combined them into a single practice with the addition of the guru as Vajradhara. Maitripa learned it from him and wrote it down. Rahula was blessed by a vision of the deities at birth. While Khyungpo Naljor received the transmission from Maitripa in India, Rahula came to visit him in Tibet and gave it to him once again. Khyungpo Naljor was famous for being able to visibly manifest the deities above his head. He did so shortly before he passed away and gave the empowerment to students a final time while saying, "This is how you should practice!" His immediate lineage holder, Mokchokpa Rinchen Tsondrü, did the practice exclusively for seven or eight years during a twelve-year meditation retreat. His main student, Kyergangpa Chökyi Senge, did the practice for only twenty-one days and as of then had a constant vision of the deities above his head.

The practice is considered so profound because it includes everything necessary for the swift attainment of liberation and enlightenment. From the instruction manual by Jamgon Kongtrul:

"The contemplative practice of the Lama Vajradhara grants the highest accomplishments in this very life. Speedy attainment of the stages of the path depends upon two factors. Dispelling of hindrances and enhancement of contemplative experience. The ultimate method for dispelling outer hindrances is that of the Protector; for inner ones that of Tara. The very best method for the outer enhancement of loving kindness and compassion is the practice of Avalokiteshvara; for the inner enhancement of bliss and heat we practice Vajrayogini. Thus a single session of this practice covers every stage of the path. [...] You can accomplish this in three months of undistracted practice. Meditation upon this without fail at each dawn session, brings about ordinary and extra-ordinary accomplishments!" [TSD]