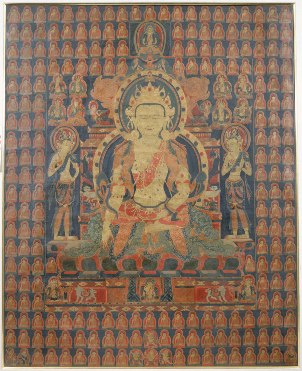 Akshobhya, the Immutable; one of the five Buddhas (rgyal ba rigs lnga), lord of the Vajra Family; his sambhogakaya form is Vajrasattva [RY]

Akshobhya [one of the five Dhyani-buddhas, his sambhogakaya form is Vajrasattva [IW]

1) Sanskrit: अक्षोभ्य, Akṣobhya Buddha. Wikipedia: 'One of the Five Wisdom Buddhas, a product of the Adibuddha, who represents consciousness as an aspect of reality. By convention he is located in the east of the Diamond Realm and is the lord of the Eastern Pure Land Abhirati ('The Joyous'), although the Pure Land of [his] western counterpart Amitābha is far better known. His consort is Lochanā and he is normally accompanied by two elephants. His color is blue-black and his attributes include the bell, three robes, and staff, along with a jewel, lotus, prayer wheel, and sword. He has several emanations. Akṣobhya is the embodiment of 'mirror knowledge' [or Mirror-like Deep Wisdom] (Sanskrit: ādarśa-jñāna; Tibetan: me long lta bu'i ye shes). A knowledge of what is real, and what is illusion, or a mere reflection of actual reality. The mirror is mind itself - clear like the sky, empty yet luminous. Holding all the images of space and time, yet untouched by them. He represents the eternal mind, and the Vajra family is connected with reason and intellect. Its brilliance illuminates the darkness of ignorance, its sharpness cuts through confusion. The Vajra family, to which Akṣobhya belongs, is associated with the element of water. This is why the two colours of Vajra are blue or white. Bright white like sun reflecting off water, and blue, like the depths of the ocean. Even if the surface of the ocean is blown into crashing waves, the depths remain undisturbed, imperturbable. And though water may seem ethereal and weightless, in truth it is extremely heavy. Water flows into the lowest place and settles there. It carves through solid rock, but calmly, without violence. When frozen, it is hard, sharp, and clear like the intellect, but to reach its full potential, it must also be fluid and adaptable like a flowing river. These are all the essential qualities of Akṣobhya. Many wrathful tantric beings are represented as blue in colour because they embody the transmuted energy of hatred and aggression, into wisdom and enlightenment.' Wisdom Library: Akṣobhya (अक्षोभ्य) is one of the five Tathāgatas appearing in the Vajradhātu-mahāmaṇḍala, according to the Nāmamantrārthāvalokinī v5.30-32. The Nāmamantrārthāvalokinī (literally, ‘an explanation of the nāma-mantras’) is a commentary (ṭīkā) on the Mañjuśrīnāmasaṃgīti. Akṣobhya is a name of Mañjuśrī (the embodiement of non-dual knowledge) and, together with other names, forms the core essence of the Mañjuśrīnāmasaṃgīti. The Nāmamantrārthāvalokinī provides the practitioner a sādhana (‘meditative practice’) to turn these names into mantras. These mantras are chanted for the benefit of all beings, and then placed and contemplated in the Vajradhātu-mahāmaṇḍala, which is an extended version of the Vajradhātu-maṇḍala. The Mañjuśrīnāmasaṃgīti (lit. ‘chanting of the names of Mañjuśrī’) is a short but influential Buddhist tantra, containing the essence of the teachings of Śākyamuni (the historical Buddha). It was composed by Vilāsavajra in the 8th century and contains 3000 verses in the anuṣṭubh meter... Akṣobhya (अक्षोभ्य) is the name of a Buddha under whom Śākyamuni (or Gautama, ‘the historical Buddha’) acquired merit along the first through nine bhūmis, according to the Mahāvastu. There are in total ten bhūmis representing the ten stages of the Bodhisattva’s path towards enlightenment. Akṣobhya is but one among the 500 Buddhas enumerated in the Mahāvastu during a conversation between Mahākātyāyana and Mahākāśyapa, both principle disciples of Gautama Buddha. The Mahāvastu is an important text of the Lokottaravāda school of Buddhism, dating from the 2nd century BCE... Akṣobhya (अक्षोभ्य) refers to “immovable Buddha” and represents one of the “five Buddhas” (pañcabuddha) as defined in the Dharma-saṃgraha (section 3). The Dharma-samgraha (Dharmasangraha) is an extensive glossary of Buddhist technical terms in Sanskrit (eg., pañcabuddha and Akṣobhya). The work is attributed to Nagarguna who lived around the 2nd century A.D.' Buddhism Tourism: Glossary of Buddhist Terms: Earliest of the non-historical celestial Buddhas who is believed to govern the Eastern Paradise also known as the Abhirati. He is mostly represented in dark blue or sometimes even golden colour. He has a vajra or a diamond sceptre in his right hand and makes the earth touching gesture from his left. He is usually shown seated on a blue elephant. [He] is well known in Nepal and Tibet; 2) unmoving, immovable, unmoved, unshaking, unshakeable, unshaken, immutable [Erick Tsiknopoulos]

chad pa'i dbang - the empowerment of the expositor (Akshobhya). (IW)

mi bskyod - Akshobhya [one of the five Dhyani buddhas, his sambhogakaya form is Vajrasattva. (IW)

mi 'khrugs pa'i gzungs chog - ritual for the liturgical recitation of the formula (dharani) of the tathagata Akshobhya. (RY)