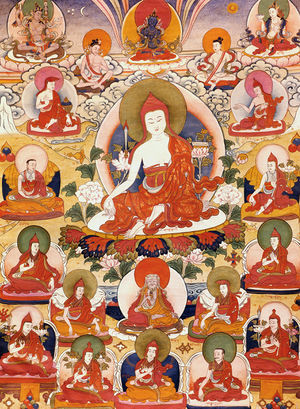 Khedrup Khyungpo Naljor, whom Jamgon Kongtrul regarded as the greatest master ever to have graced Tibet after Guru Padmasambhava and the 25 disciples, was born in a year of the tiger in the southern part of Tibet, into a distinguished family, the clan of the Khyung, being the same extended family clan from which the lord of yogins Jetsun Milarepa hailed somewhat later. Thus, his own name meant "the Yogin of the Garuda clan." Possible but unconfirmed dates for him are 978-1127. At his birth the great Mahasiddha Amogha came flying through the air from India and made a prophecy that this newborn child, who was already highly realized, would in time come to India and there receive the profound transmissions that would make him a great guide of beings. The qualities of Khyungpo Naljor began to manifest while he was still very young. When he was five years old, he told detailed stories about his past existences, and revealed insight into his lives to come, and into the future in general. By the age of ten he excelled in reading, writing, arithmetic and both Chinese and Indian astrology. At twelve, in accordance with the tradition on his father's side of the family, he studied the Bon teachings. Later on he practiced Dzogchen, and finally Mahamudra. Then, taking jewels and gold dust to present as offerings, he left for Nepal and India in search of teachings. During his journeys Khyungpo Naljor was unconcerned about comforts for himself and endured much hardship. Over the course of seven journeys, he studied with a hundred and fifty sages and great adepts. He adopted six of these teachers as his glorious Root Lamas, of these; the wisdom Dakinis Niguma and Sukhasiddhi had received direct transmissions from Vajradhara, the enlightened enjoyment body of the sixth Buddha. His other Indian main teachers were Maitripa, Rahula, Vajrasanapa and a mysterious master whom we only know as Bäpä Naljor (sbas pa'i rnal 'byor) or Hidden Yogin. This master is truly a hidden yogin because we know virtually nothing about him other than that he gave a number of transmissions to Khyungpo Naljor. In several lineage supplications he is also referred to as "Bäpä Naljor Drachen Dzinpa" (sbas pa'i rnal 'byor sgra gcan 'dzin pa), or "Hidden Yogin Rahula". He is thus not to be confused with the aforementioned Mahasiddha Rahula. According to Ven. Kyabje Tenga Rinpoche, the hidden yogin is named Rahula because he was the son of the Buddha himself in a previous lifetime, whose name was also Rahula. In some publications Bäpä Naljor has been confused with Maitripa. These masters took delight in Khyungpo Naljor and granted him the ultimate oral instructions that cut off all distractions and he practiced single-pointedly. Among the vast amounts of teachings which he received, five cycles in particular stand out, and continue to form the core of the Shangpa teachings to the present day. They are the teachings of Niguma; of Sukhasiddhi; of Vajrasanapa; of Maitripa; and of Rahula. The foremost of these five cycles, the teachings of the awareness dakini Niguma, is further subdivided into three parts. The fifteen most exalted instructions of the dakini; the condensed version of the instructions on the "three bodies"; and the extremely condensed version which summarizes the whole of the teachings in the instructions of the deathless and naturally liberated nature of mind. Through the thorough practice of all of these, all doubts were eradicated and he obtained both ordinary and extraordinary accomplishments. Khyungpo Naljor established his monastic seat at Shang-Shong in the Yeru Shang valley, which is how he came to be called Lama Shang and his lineage, the Shangpa Kagyu, got its name. He had thousands of disciples from all over Tibet and all walks of life. On numerous occasions he performed miracles which were witnessed by all present. Khyungpo Naljor passed away at the extraordinary age of approximately 150 years, as tradition has it. Some present-day "scholars" take issue with that, but in the light of various newscasters every now and then reporting about people in our present time who have reached an age of well over a hundred, I for one don't see why one should not at least take the possibility into account, rather than rejecting the truth of it right out of hand!