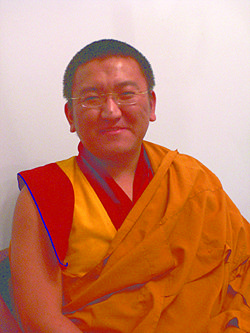 Ngawang Lekshey Gyaltso is the fifteenth in the lineage of Changling Rinpoches. His lineage was started by the Tibetan Rechungpa who lived in the eleventh century. He himself was a student of Milarepa. In the Tibetan Buddhist tradition establishing a teacher as a true member of an unbroken lineage of teachers is very important.

Rinpoche’s grandmother, surprised by the news, took it upon herself to look into the situation. She traced the source to an old yogi, Lama Trakden, a student of the previous Changling Lingpa. Lama Trakden had gone to see Khyentse Rinpoche who was giving teachings in Mysore at Penor Rinpoche’s monastery and requested him to recognize the tulku of his root teacher. This is how it came about that both Khyentse Rinpoche and Penor Rinpoche made the recognition together.

As an 11 year old boy, Rinpoche entered Shechen Monastery and was enthroned by Khyentse Rinpoche and ordained by Trulshik Rinpoche. In the first year Rinpoche learned how to read and write Tibetan. The following year Shechen opened its philosophical college and Khyentse Rinpoche put Changling Tulku into the program when he was twelve, an age considerably younger than usual. When Rinpoche was fifteen, his root teacher Khyentse Rinpoche passed away. At age sixteen Rinpoche began to give teachings to others students in college. At eighteen Shechen Rabjam Rinpoche, abbot of Shechen Monastery, sent Changling Rinpoche to complete his studies of the Heart Sutra under the tutelage of the great khenpos of Penor Rinpoche’s college in Mysore. Rinpoche took full monk’s ordination at age twenty with Trulshik Rinpoche. Rinpoche graduated with a khenpo degree at the age of twenty-one.

In 1998, during the annual Nyingmapa Aspiration Prayer Festival in Bodhgaya,the teachers who are responsible for the continuity of the Northern Treasures tradition elected Changling Rinpoche to be the next head of the lineage. Since the passing of Dilgo Khyentse Rinpoche, Rinpoche’s main tutors are Khabjes Trulshik Rinpoche, Dodrupchen Rinpoche, Penor Rinpoche, Taklung Tsetrul Rinpoche and Shechen Rabjam Rinpoche. Rinpoche teaches the senior students at Shechen College and those in a traditional three-year retreat. Rinpoche protects the integrity of the ritual tradition of Shechen and teaches ritual and Nyingma tantra to senior students.

In previous years Changling Rinpoche was in charge of a section of the Shechen Monastery called dratsang, which literally means ‘the collection of monks’. He has been a director of Shechen Monastery. Currently he is devoting his time to writing commentaries on the works of His Holiness Dilgo Khyentse Rinpoche and searching out missing texts of the Northern Treasure Lineage. As the abbot of the Sechen Monastery shedra (monastic college), he holds a post previously held by such illustrious lamas as Mipham Rinpoche, Sechen Gyaltsap and Khenpo Gangshar.

Rinpoche was warmly received when he began to travel and teach outside of Nepal, starting with Australia in 2002. His youthful enthusiasm combined with his amazing knowledge of Buddhist doctrine and command of English language made his teachings an enriching experience for all who attended. He began to teach in Australia, in North America in 2004 and in Europe in 2005. His activities in Canada are currently centered in Vancouver, Victoria, Sechelt and Vancouver Island in British Columbia. In the US he has visited both coasts: Santa Cruz, California and the New York area. In 2008 he also visited Halifax, Berkely, Boston and Atlanta. He will return to North America in June 2009. In 2010 the Canadian and United States organizations of the Northern Treasures lineage will be hosting a visit by the rebirth of his teacher, Dilgo Khyentse Rinpoche. Rinpoche has the remarkable ability to seemingly defy time by including in a single talk an in depth analysis and exposition of the sutra & tantra paths.

In the late 14th century C.E., Tulku Zangpo Drakpa found the famous Prayer in Seven Chapters. This he gave to Rigdzin Godem for whom they were the key to finding the main body of teachings. Later branches were recovered by Tennyi Lingpa (15th c.) and Garwang Dorje (17th c). Among its many famous teachings is the Gongpa Sangtal, one of the most sublime works on The Great Perfection among Padmasambhava's vast teachings.

Dudjom Rinpoche wrote in his History of the Nyingma School that as the Northern Treasures were given to help the king and his descendants they subsequently served all Tibetans like a faithful minister.

Decades ago, when the Chinese sought to occupy Tibet, many fled their homeland. These precious Treasures were dispersed and dwindled. The texts are now being collected and translated. The oral teachings are being gathered, preserved and offered as courses.

Brief History of the Changling Lineage

The great 11th century translator Marpa could only translate two, of the eight chapters, of the eight dharmas teaching. He said to Milarepa that one of his disciples would do it. Later Milarepa said to his student Rechungpa, “Since I have a prophecy from my master that one of my students will go to India, you should go to India and get the rest of the formless teachings.” Rechungpa went to India and met Tipupa who was a son of Marpa who had died accidentally. Through the transference of his consciousness into a pigeon, Tipupa had gone to India and then taken birth as a Brahman’s son. He was a student of Naropa and Maitripa. Tipupa received all of the formless teachings from Naropa and Maitripa. When Rechungpa came to India Naropa had already gone to Khechara, one of the six deva-worlds, so Rechungpa received the rest of the formless dakini teachings from Tipupa, brought them back to Tibet and gave them to Milarepa. The lineage is Naro, Tipupa, Rechungpa and Milarepa. The Rechung Kagyu is mainly based on that formless dakini teaching and the teaching Rechungpa received from Naropa.

The Rechungpa practice extends from the preliminary stage to mahamudra. The ultimate teachings of mahamudra are the formless dakini teaching. Milarepa gave teachings to everyone equally but the closest heart son of Milarepa was Rechungpa and so Milarepa wrote teachings from the development stage to the completion stage for him only; not by singing but by composing them himself. Because of that we have this extremely direct explanation from Milarepa himself. It has not been passed from master to student to student, but it is the exact view of Milarepa himself. The teachings are existent in Tibetan. They have not been translated since no one practices it in the west.