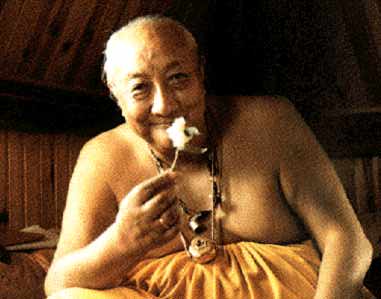 (b. 1910). Regarded by followers of all four schools as one of the foremost masters of Tibetan Buddhism. Among his other names are Rabsel Dawa and Tashi Paljor, and his tertön names Osel Trulpey Dorje and Pema Do-ngak Lingpa. His two root gurus were Shechen Gyaltsab Pema Namgyal and Dzongsar Khyentse Chökyi Lodrö. His collected works fill numerous volumes.

Like the earth and the pervading elements,
Enduring like the sky itself endures,
For boundless multitudes of living beings,
May I be their ground and sustenance.

At the very center of the Tibetan Buddhist world is the lama or spiritual master. Dilgo Khyentse Rinpoche was the archetype of the spiritual teacher; someone whose inner journey led him to an extraordinary depth of knowledge and enabled him to be, for all who met him, a fountain of loving kindness, wisdom and compassion.

Dilgo Khyentse Rinpoche was one of the last of the generation of accomplished lamas who completed their education and training in Tibet. He was born in 1910 in Eastern Tibet to a family descended from the royal lineage of the ninth century king Trisong Detsen. When he was still in his mother’s womb, he was recognized as a tulku or incarnation by the illustrious teacher, Mipham Rinpoche, and later was enthroned as an emanation of Jamyang Khyentse Wangpo, one of the most important tertons (treasure-finders) and writers of the 19th century and the main inspiration for the non-sectarian movement. Khyen-tse means wisdom and love. The Khyentse tulkus are incarnations of several key figures in the development of Tibetan Buddhism including Kunkhyen Longchenpa, Jigme Lingpa and Vimilamitra.

Even as a little boy, Rinpoche manifested a strong desire to devote himself entirely to the spiritual life. Although his father wanted him to follow in his footsteps, he finally agreed to allow his son to pursue his own wishes and, at the age of eleven, Rinpoche entered Shechen Monastery in Kham, one of the six main monasteries of the Nyingma School.

He had many great teachers including his root guru, Shechen Gyaltsap from whom he received all the essential empowerments and instructions of the Nyingma tradition. Before Shechen Gyaltsap passed away, Khyentse Rinpoche promised him that he would unstintingly teach whoever asked him for teachings. Then, from the age of fifteen until he was twenty-eight, he spent his time meditating in silent retreat, living in isolated hermitages and caves, or sometimes simply under the shelter of overhanging rocks in the mountainous countryside.

He later spent many years with Dzongsar Khyentse Chokyi Lodro (1893-1959) receiving empowerments and teachings. When he told his teacher that he wanted to spend the rest of his life in solitary retreats, Chokyi Lodro answered, “The time has come for you to teach and transmit to others the precious teachings you have received.” Since then, Rinpoche worked for the benefit of beings with the tireless energy that is the hallmark of the Khyentse lineage.

In the late 1950’s the Chinese invasion of Tibet began to rage in Kham, and Khyentse Rinpoche and his family made a narrow escape to Central Tibet, leaving everything behind, including Rinpoche’s precious books and most of his own writings. Hundreds of thousands of Tibetans including Rinpoche, his wife, Khandro Lhamo, and their two young daughters were forced to flee their homeland. They sought exile in Bhutan where the Bhutanese Royal Family graciously received them. Rinpoche taught in a large school near the country’s capital, and soon his inner qualities drew many students to him. As the years passed he became the foremost Buddhist teacher in Bhutan, revered by all from the King to the humblest farmer. In Bhutan, Rinpoche gave many teachings, performed ceremonies, wrote treaties and texts, made retreats, and oversaw the preservation and construction of numerous stupas and statues.

Rinpoche devoted considerable efforts to founding and sustaining temples, colleges, and monasteries where study and practice of the Buddhist tradition would be undertaken. One of his last great tasks was the founding of a new Shechen Monastery in Nepal. There he transplanted the rich Shechen tradition to a new home - a magnificent monastery in front of the great stupa of Bodhanath. It was his wish that the teachings be continued in their authentic purity, just as they were studied and practiced in Tibet. He appointed his grandson, Rabjam Rinpoche, as abbot of the Monastery and invested enormous care in the education of the promising young lamas capable of continuing the tradition. The monastery now has over 300 monks studying and practicing under its auspices.
In India, he built a stupa at Bodhgaya, and planned to construct seven stupas in pilgrimage places to avert conflict, disease and famine and promote world peace.

Khyentse Rinpoche was widely regarded as one of the greatest Dzogchen masters of his time and was the teacher of many important lamas including His Holiness the Dalai Lama, Chogyam Trungpa Rinpoche, and more teachers from the four schools of Tibetan Buddhism. Even in his later years, Rinpoche traveled throughout the Himalayas and the West, transmitting and explaining the teachings to his countless students. His books have been translated into several Western languages, and his inspiration is still strongly felt today. He was a terton and his Terma or rediscovered texts fill five volumes.

Once he was finally allowed to return to Tibet, Rinpoche made three extended visits to Tibet. He inaugurated the rebuilding of the original Shechen Monastery which had been destroyed during the Cultural Revolution. While in Central Tibet, he petitioned the Chinese government for permission to restore Samye Monastery stressing its importance for the world’s cultural heritage. Samye, founded in the eighth century, was the first Buddhist monastery in Tibet and by 1990 its main temple had been restored. Wherever he went in Tibet, he was greeted with great joy and emotion by people who had waited for years to see him again.

Scholar, sage and poet, Dilgo Khyentse Rinpoche never ceased to inspire all who encountered him through his extraordinary presence, simplicity, dignity and humor. Wherever he was, he would always pray and meditate for several hours before dawn and then embark on an uninterrupted flow of activities and teachings - in gatherings ranging from a few dozen to several thousand people - until late into the night. His immense knowledge, the warmth of his blessings, and the depth of his inner realization gave his teachings a quality quite different from others.

His achievements in different fields each seem more than enough to have filled a whole lifetime. He spent 20 years in retreat, wrote over 25 volumes on Buddhist philosophy and practice, published and saved countless texts, and initiated numerous projects to preserve and disseminate Buddhist thought, tradition and culture. But above all, what he considered most important was that the teachings he had realized and transmitted were put into practice by others.

He profoundly touched the minds and hearts of students and teachers in the west and east, and left a living legacy of teachings and humanitarian action that is continuing through the work of his students and the Dilgo Khyentse Fellowship. At the age of 81, after a brief illness, he passed away in Bhutan. His cremation was attended by over fifty thousand people, including teachers and disciples from around the world.